`The Uninvited` Alternative to CPAC Adds Speakers for Thursday

A more robust schedule has shaped up for a full day of speakers on Thursday, an event meant as a counterpoint to the tiresome Conservatism Inc. presentation that the annual CPAC conference has become.

In particular, the issues of immigration and the threat of jihadist Islam get proper attention at “The Uninvited,” as noted in an earlier blog CPAC Tries to Appeal to Conservative Grassroots—But Look Who's "Uninvited"!.

In another effort against corrupted conservatism, a petition has been organized to demand the American Conservative Union (which sponsors CPAC) disassociate itself entirely from Grover Norquist and his protege Suhail Khan because of their association with the Muslim Brotherhood. It is disturbing indeed that a major conservative organization has been infiltrated by seditious characters who prefer the Koran to the Constitution. These facts aren’t news: Frank Gaffney warned about Norquist in 2003, and in 2011 David Horowitz called out Norquist from the CPAC stage in a very informative historical speech. (Watch.) But the influence remains, particularly with Suhail Kahn as a member of the ACU Board. 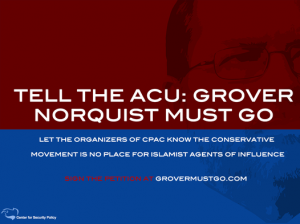 Both Norquist and Khan have had relationships with a bevy of individuals with strong ties to the Muslim Brotherhood– including jailed al-Qaeda and Brotherhood member Abdurahman Alamoudi and onetime head of Palestinian Islamic Jihad Sami al-Arian– that make their participation in the American Conservative Union anathema to the organization’s supposed vision. It behooves true conservatives, Republicans–and, indeed, the American people as a whole– to resist such subversive operations and to expose and counter those who enable them. [. . .]

Back to The Uninvited, speakers added include Ted Cruz, David Vitter, Steve King, Mo Brooks and many others.

Following is the final schedule for “The Uninvited II: The National Security Action Summit:” The program will be live-streamed on BreitbartTV.