Where's The Civilizational Divide In Ukraine?

We've all heard lately that the western and eastern halves of Ukraine have different cultures, with western Ukrainians, from Kiev west voting one way and eastern Ukrainians the other, but I'm wondering if that's not oversimplifying things

As the ideological division of Europe has disappeared, the cultural division of Europe between Western Christianity, on the one hand, and Orthodox Christianity and Islam, on the other, has reemerged. The most significant dividing line in Europe, as William Wallace has suggested, may well be the eastern boundary of Western Christianity in the year 1500. This line runs along what are now the boundaries between Finland and Russia and between the Baltic states and Russia, cuts through Belarus and Ukraine separating the more Catholic western Ukraine from Orthodox eastern Ukraine, swings westward separating Transylvania from the rest of Romania, and then goes through Yugoslavia almost exactly along the line now separating Croatia and Slovenia from the rest of Yugoslavia. In the Balkans this line, of course, coincides with the historic boundary between the Hapsburg and Ottoman empires. The peoples to the north and west of this line are Protestant or Catholic; they shared the common experiences of European history — feudalism, the Renaissance, the Reformation, the Enlightenment, the French Revolution, the Industrial Revolution; they are generally economically better off than the peoples to the east; and they may now look forward to increasing involvement in a common European economy and to the consolidation of democratic political systems. The peoples to the east and south of this line are Orthodox or Muslim; they historically belonged to the Ottoman or Tsarist empires and were only lightly touched by the shaping events in the rest of Europe; they are generally less advanced economically; they seem much less likely to develop stable democratic political systems.

Doesn't Huntington's line, however, not run through the middle of Ukraine, but instead divides the far west of Ukraine (Lviv/Lvov/Lwow/Lemburg, the Carpathians, and the other places ruled by the Austrians and/or the Polish Republic) from the rest of the Ukraine? The far west, such as Galicia, is the stronghold of the Ukrainian Greek Catholic Church, which is in "full communion" with Rome. (Does this mean the priests can marry?) While the rest of the country is kind of divided between Orthodox churches, one reporting to Moscow and another to Kiev.

There's a fair amount of evidence that the most dedicated people in the recent Kiev uprising tended to be from Lviv and other points in the far west. 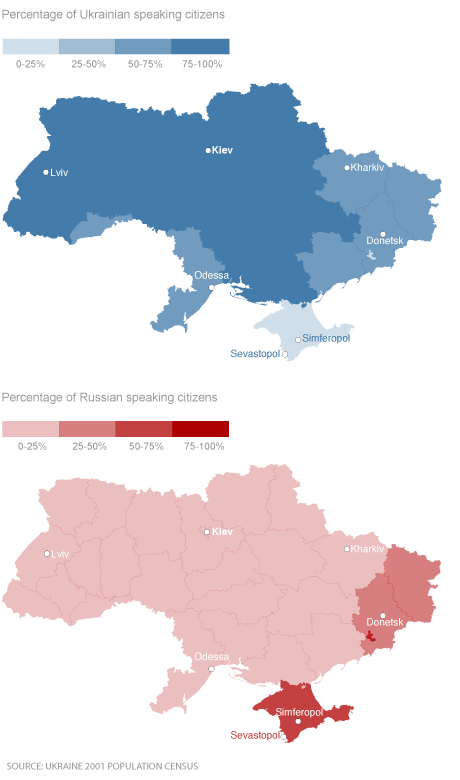 On the other hand, Russian-speakers are concentrated in the east (and Crimea), while the far west and the midwest around Kiev both speak Ukrainian.

You might think that the west would be more industrial and the east more rural, but it's the other way around. By way of analogy, think of the American midwest. In the east of the midwest Chicago was a great industrial city, but was also politically kind of backwards, while Iowa to the west was mostly rural but in some ways more advanced.

So, language, religion, economy, and history don't line up all that well in Ukraine, which makes it kind of unstable. On the other hand, this blurriness offers room to build compromises.

Time will tell how accurate was Huntington's 1993 prediction that Russians and Ukrainians won't get into an all-out war:

Conflicts and violence will also occur between states and groups within the same civilization. Such conflicts, however, are likely to be less intense and less likely to expand than conflicts between civilizations. Common membership in a civilization reduces the probability of violence in situations where it might otherwise occur. In 1991 and 1992 many people were alarmed by the possibility of violent conflict between Russia and Ukraine over territory, particularly Crimea, the Black Sea fleet, nuclear weapons and economic issues. If civilization is what counts, however, the likelihood of violence between Ukrainians and Russians should be low. They are two Slavic, primarily Orthodox peoples who have had close relationships with each other for centuries. As of early 1993, despite all the reasons for conflict, the leaders of the two countries were effectively negotiating and defusing the issues between the two countries. While there has been serious fighting between Muslims and Christians elsewhere in the former Soviet Union and much tension and some fighting between Western and Orthodox Christians in the Baltic states, there has been virtually no violence between Russians and Ukrainians.

Well, we shall see.

Still, I recall the video from a few days ago of a large number of Ukrainian soldiers courageously jogging up to some worried Russian soldiers, who fired some warning shots in the air, but then the Ukrainians slowly jawboned the Russians into letting them go about their business. I suspect that would have ended much worse if the Ukrainians didn't understand how to talk to the Russians.