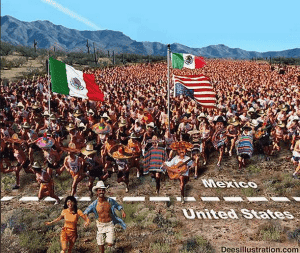 H/T American Renaissance for alerting me that Jason Richwine has managed to get a discussion of the crucial question of immigrant quality into a quasi MSM outfit.

Admittedly Are Low-Skill Immigrants Upwardly Mobile? July 8, 2015 was hidden away in the Real Clear Policy section of the powerful Real Clear Politics news aggregator website but it is a step forward.

Many people take for granted that today's low-skill immigrants will be just like the Irish and Italians of Ellis Island lore, coming to the U.S. as menial laborers but rising to the middle class within a few generations. But it is a serious mistake to assume that today's immigrants will assimilate as quickly as others did in the past. In fact, the data from recent immigration waves tell a pessimistic story about upward mobility.

He then reviews the Census Bureau's Current Population Survey data on Hispanics, which is very discouraging:

All of these data sets reveal that economic and educational progress for Hispanics stalls after the second generation, leaving a substantial gap between white Americans and Hispanic Americans.

If we are serious about improving social mobility in the U.S., then importing millions of low-skill immigrants (of any nationality) with uncertain prospects for advancement cannot be the right policy. No one wants the U.S. to be defined by the gated communities and rigid class lines common in Latin America — especially when the class lines are tinged by skin color — but that is the outcome we risk.

Unfortunately I think he is wrong about this: it is exactly what the Democratic and Conservatism Inc Establishment does want. See Democratic Elite prefers Martha's Vineyard…Brazilian and The Bush Betrayal: Maybe He's Not Thinking But Feeling—Family Feeling, Mexican Style

Jason Richwine was perhaps the most notable victim of the 2013 Gang of Eight Legislative battle as discussed by Peter Brimelow in Jason Richwine “Resignation” Marks The Surrender Of Conservatism, Inc. To Cultural Marxist PC (Peter proved right of course.) Richwine’s then employer, the Heritage Foundation was particularly contemptible. And although Richwine did subsequently get to ask “Why Can't We Talk About IQ?” an issue which featured in his Harvard PhD thesis but not his Heritage work, I see that he avoids mentioning the obvious inference of the Census data in his current discussion.

But for being able to discuss the question of immigrant performance at all Jason Richwine and the rest of us should probably thank Donald Trump.