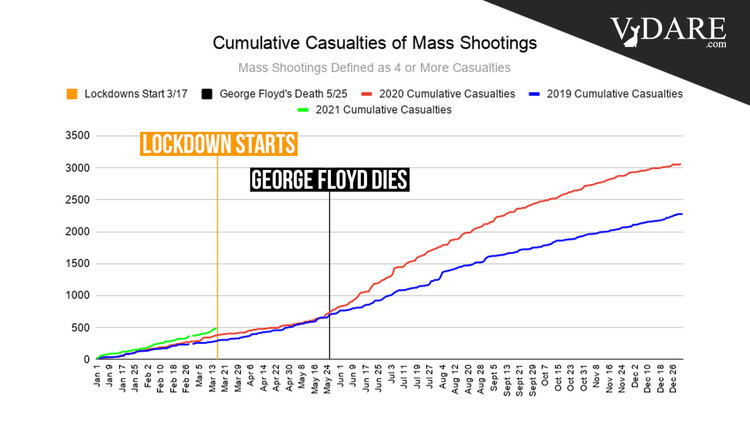 With mass shootings back in the news, above are a couple of graphs of cumulative casualties from mass shootings that I made from Wikipedia’s list of Mass Shooting Incidents in 2020 and 2019. These shed some light on what likely caused the huge violence boom of 2020—Covid or the Racial Reckoning—and who is doing most of the mass shooting. Wikipedia uses the usual definition of a mass shooting as an incident with at least 4 casualties, whether killed or wounded.

As you can see, in terms of cumulative mass shooting casualties, the two years started out fairly similar, with 2020 pulling ahead in early March. During the first ten weeks of Covid, 2020 had fewer casualties than in the same period of 2019. But from Memorial Day Weekend onward, there were far more casualties from mass shootings in 2020 than in 2019:

In other words, 2020 started off more violent than 2019 for reasons nobody has sought to explain (in part because they might just be a statistical fluke). When lockdowns occurred, 2020 settled down somewhat. Then George Floyd died and the Racial Reckoning was declared and mass shootings exploded.

This is not to say that we can definitively rule out the pandemic having some mysterious delayed reaction effect that suddenly caused mass shootings to explode ten weeks into it, which just coincidentally happened to be the first weekend of the Mostly Peaceful Riots.

Contrary to what you might imagine from news coverage, the New York Times reported in 2016 that in 2015’s 358 mass shootings, “nearly three-fourths of victims and suspected assailants whose race could be identified were black.” Similarly, Mass-Shootings.info reported that 68% of mass shooters charged in 2019 and 73% in 2020 were black. Of the 15 mass shootings in 2020 with the highest number of casualties, at least 13 involved black social events (the other two involved social events but the newspapers didn’t report the race of the shooters or victims).

So, my impression is that the media-declared Racial Reckoning led cops to retreat to the donut shop and led blacks to party exuberantly, which led to mass shootings. Of course, the real villain in all this is White Supremacy for reasons.

Perhaps this is all just ancient history so why am I bringing up all these hatestats?

I’d like to do similar graphs for total murders in 2020 vs. 2019. Gun Violence Archive has the data, but I haven’t figured out how to download more than 2000 lines of their database. Any suggestions?