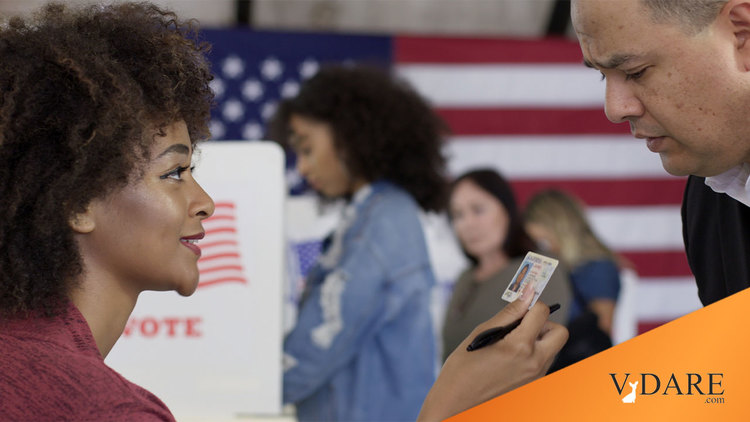 The H.R. 1 "For the People Act" has passed the House already. If it becomes law, it will make our elections even less secure than they are now, and prevent states from fixing some of the problems.

Specifically regarding Voter ID, Von Spakovsky writes of H.R. 1 that

It would eviscerate state voter ID laws that require a voter to authenticate his identity. Indeed, it would force states to allow anyone to vote who simply signs a form saying that they are who they claim they are. When combined with the mandate that states implement same-day voter registration, it means I could walk into any polling place on Election Day, register under the name John Smith, sign a form claiming I really am John Smith, cast a ballot, and walk out. Not only would election officials have no way of preventing that or verifying that I am not really John Smith, I could repeat this in as many polling places as I can get to.

The opposition to a secure voter ID system should make us suspicious. Why would you object to secure Voter ID, unless you want to cheat?

As it turns out, polling indicates overwhelming support for Voter ID.

As the U.S. Senate considers legislation that would revamp America’s election laws, voters still overwhelmingly support laws requiring that voters show identification before casting a ballot. A new Rasmussen Reports national telephone and online survey finds that 75% of Likely U.S. Voters believe voters should be required to show photo identification such as a driver’s license before being allowed to vote. Only 21% are opposed to such a requirement. (To see survey question wording, click here.) [75% Support Voter ID Laws, Rasmussen Reports, March 17, 2021]

The Republicans could use this information in defense of Voter ID. That is, if they don't recur to their usual snatch-defeat-from-the-jaws-of-victory strategy.

Thirty-six states have enacted some form of voter ID law, but those laws would be nullified if the Senate approves H.R. 1, which passed the House on a party-line vote. Critics say H.R. 1 “would force states to allow anyone to vote who simply signs a form saying that they are who they claim they are.”

Support for voter ID laws has actually increased since 2018, when 67% said voters should be required to show photo identification such as a driver’s license before being allowed to vote.

Here's a breakdown of the results:

Eighty-nine percent (89%) of Republicans support voter ID requirements, as do 60% of Democrats and 77% of voters not affiliated with either major party.

Even a majority of Democrats support it.

The survey of 1,000 U.S. Likely Voters was conducted on March 14-15, 2021 by Rasmussen Reports. The margin of sampling error is +/- 3 percentage points with a 95% level of confidence. Field work for all Rasmussen Reports surveys is conducted by Pulse Opinion Research, LLC. See methodology.

Democrats have claimed that voter ID laws discriminate against black voters and other minorities, but voters reject that claim by a nearly 2-to-1 margin. Sixty percent (60%) say laws requiring photo identification at the polls don’t discriminate, while 31% say voter ID laws do discriminate. Ten percent said they are not sure.

A majority of Democrats (51%) say voter ID laws are discriminatory, while 79% of Republicans and 67% of unaffiliated voters say requiring identification at the polls is not discriminatory.

That seems contradictory, and it is. There were two questions on the poll:

So 51% of Democrats said Voter ID is discriminatory, but 60% of them support it. Go figure.

Majorities of whites (74%), blacks (69%) and other minorities (82%) say voters should be required to show photo identification before being allowed to vote. Voters under 40 support voter ID laws more than do older voters.

On the other hand...

Voters who strongly approve of Joe Biden’s job performance as president were most likely to say voter ID laws are discriminatory.

As I've pointed out a number of time, we can learn from Mexico's voter registration system. I've been writing about it for years (see here) but our politicians don't seem to care much about it.

The Mexican system provides the ID cards to all voters. Why not do the same here?