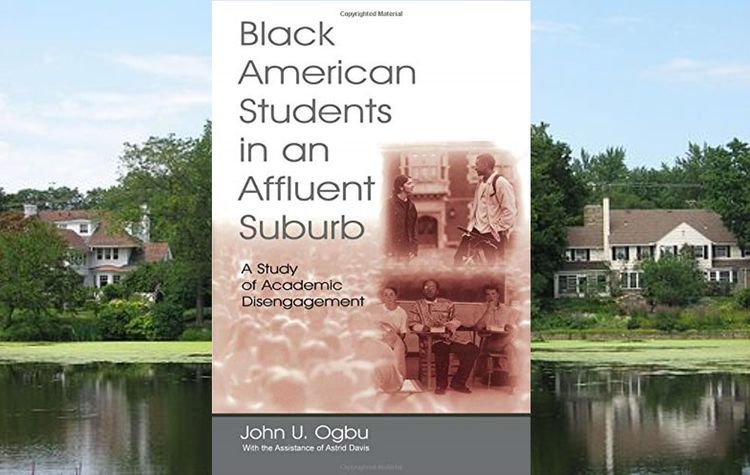 This trail-blazing suburb has tried for 60 years to tackle race. What if trying isn’t enough?

SHAKER HEIGHTS, Ohio — It’s an article of faith in this Cleveland suburb: If any place can navigate the complex issues of race in America, it’s Shaker Heights.

And in the Stanford database of all the school district test scores in the U.S., Shaker Heights has, by one metric, the third largest white-black gap, trailing only comparably liberal Berkeley and Chapel Hill.

This is known as the Shaker Heights Effect: Rich liberal towns tend to have high scoring white kids but don’t seem to do well at educating black kids. Shaker Heights even hired Nigerian-born anthropologist John Ogbu to study this question. Wikipedia writes:

In 1986 Signithia Fordham co-authored, along with Ogbu, a study which concluded that some African American students in a Washington, D.C., high school did not live up to their academic potential because of the fear of being accused of “acting white.” Ogbu further echoed these findings in his 2003 book Black American Students in an Affluent Suburb: A Study of Academic Disengagement (which summarized his nine-month research on the educational gap between white and African-American students in the Shaker Heights City School District located in the upscale Cleveland suburb of Shaker Heights, Ohio). He concluded that these students’ cultural attitudes hindered their own academic achievement and that these attitudes are too often neglected by parents, educators and/or policymakers.

But this long Washington Post article on Shaker Heights school race gap doesn’t even mention Ogbu, who sadly died soon after finishing his book. Back to the article:

So why, last November, was 16-year-old Olivia. M. [who is black] on the stage of Shaker Heights High School, begging the packed auditorium to understand how hard it is to be one of the few black kids in Advanced Placement English?

“I need answers,” Olivia said after escaping her seat, jumping onstage and taking the microphone out of the principal’s hand. She had ignored her mom’s admonition to keep quiet and, unable to suppress her rising anger, outed herself as the student at the center of a swirling controversy.

Yet in Shaker Heights, healthy race relations are a cornerstone of the community’s identity, the reason many choose to live here, a central organizing principle for the schools. …

Taxpayers, including some of the wealthiest people in the Cleveland area, approved one tax levy after the next, driven by the slogan “a community is known by the schools it keeps.”

While some inner-ring suburbs flipped from virtually all white to almost entirely black over time, Shaker schools remain nearly half white and just over half black decades after the first black families moved to the city.

Shaker Heights traditionally was a white and black suburb, without those pesky Asians and Hispanics to raise confusing questions about The Narrative. But, the schools are now 12% Asian, Hispanic, multiracial or other. But that’s apparently a small enough number to not be worth mentioning.

But the story of Shaker Heights shows how moving kids of different races into the same building isn’t the same as producing equal outcomes. A persistent and yawning achievement gap has led the district to grapple with hard questions of implicit bias, family responsibility and the wisdom of tracking students by ability level.

The Stanford database of test scores doesn’t find a single school district in the country where black students averaged statistically significant higher test scores than the white students. But that finding seldom comes up in all these articles that get printed year after year about some school district where everybody is shocked, shocked to find white-black gaps in test scores.

Last school year, 68 percent of white 11th-graders were enrolled in at least one AP or IB course, but just 12 percent of black students were.

“Any time you break our data out by race, we look like two different schools,” said Chris Rateno, director of student data systems for the district, which is home to about 31,000 people and eight schools.

The racial tension coursing through the packed auditorium last November traced back to a tense exchange between Olivia and a veteran AP English teacher, Jody Podl [who is white], six weeks earlier. Olivia had been dozing in class, playing with her phone. Now, her first big assignment of the year was late. The teacher had admonished and embarrassed Olivia. Olivia’s mom fired off a three-page complaint, suggesting racism and charging bullying. The district put the teacher on leave to investigate.

The racism allegation was quickly dismissed, but on Nov. 8, the date of the community meeting, the district was still investigating Podl, who is white, for bullying. Her fellow teachers were furious. Would they be accused of racism or bullying every time they told a student to do better in class? They arrived to the community meeting in force, wearing red union T-shirts.

“What happened to Jody (and is still happening to Jody) could happen to any one of you,” the union president said in an email encouraging teachers to attend the meeting.

And yet this is a district trying to raise the achievement levels of black students. Shouldn’t teachers do everything they can to encourage promising African American kids?

Why is a teacher telling a student to wake up, put away her phone, and do her work discouragement? I guess it’s because the student is black and the teacher is white.

As Wordsworth would say:

Ogbu! thou shouldst be living at this hour:
Cleveland hath need of thee