The NEW YORK TIMES Hates "Hate" In Garland, But Is Unwilling To Face Facts About Islam 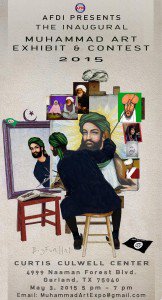 Steve Sailer has pointed us to a New York Times editorial (Free Speech vs. Hate Speech, May 6, 2015) about the recent festivities in Garland, Texas. The editorial is striking in its juvenility, with the following two paragraphs as the lowest of its lowlights:

[It is] clear that the Muhammad Art Exhibit and Contest in Garland, Tex., was not really about free speech. It was an exercise in bigotry and hatred posing as a blow for freedom.

Some of those who draw cartoons of the Prophet Muhammad may earnestly believe that they are striking a blow for freedom of expression, though it is hard to see how that goal is advanced by inflicting deliberate anguish on millions of devout Muslims who have nothing to do with terrorism. As for the Garland event, to pretend that it was motivated by anything other than hate is simply hogwash.

To the delicate snowflakes of the Times’s editorial board, “hate” is beyond the pale. (They presumably hate it!) But as the late Samuel Huntington wrote, “It is human to hate. … [People] naturally distrust and see as 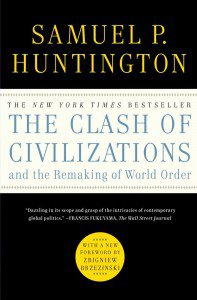 threats those who are different and have the capability to harm them.” [from page 130 in the 2011 paperback edition of The Clash of Civilizations and the Remaking of World Order]

Indeed, distrust seems like a sensible reaction to the repeated experiences, worldwide, that crowds of Muslims who object to our considered view of them as violent primitives demonstrate their displeasure at our conclusion by being violent and primitive.

In a never-published letter-to-the-editor, my friend and VDARE.com colleague Brenda Walker, years ago, drew the obvious follow-on conclusion:

The bizarre hysterical violence occurring now in Pakistan over the Danish cartoons demonstrates that there are no shared values of any importance between western democracies and Islamic cultures.

Surely we must conclude that Islam and the West have irreconcilable cultural differences. It's time to forget about embracing diversity with people who would kill us over a few drawings and just get on with our very different approaches to life in separate geographical locales. Ending Muslim immigration would be a good first step toward cultural realism.

But among the commentary specifically about Pamela Geller’s Islamo-revealing event in Garland, I think a couple of National Review’s authors, both writing before the Times belched forth its sophomoric editorial, best explained what’s at stake. According to Rich Lowry (who’s often in disfavor here at VDARE.com):

The day there can be the Muslim equivalent of the play The Book of Mormon without the writers, actors, and audience members fearing for their lives will be the day that Islam is reformed. Then, and only then, will mockery of Islam by the likes of Pamela Geller and her ilk be a tasteless irrelevance, rather than a statement from atop the ramparts of free speech.

Yes, there is such a thing as self-restraint and consideration of the sensibilities of others, but it shouldn’t be the self-restraint of fear. Pamela Geller is a bomb-thrower, but only a metaphorical, not a literal, one. That’s the difference between her and her enemies — and between civilization and barbarism.

And in Islam and Free Speech: Missing the Point in Garland (May 4, 2015), Andrew McCarthy wrote: 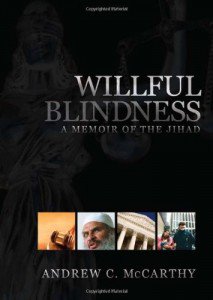 It is not the purpose of Pam Geller, Geert Wilders, the Charlie Hebdo cartoonists, and other activists to insult Muslims. Their mission is to awaken us to the challenge of Islamic supremacists — not just the violent jihadists but also the powerful Islamist forces behind the jihad. Islamists are attempting to coerce us into abandoning our commitment to free expression. They are pressuring us to accommodate their totalitarian system rather than accepting assimilation into our liberty culture.

McCarthy is a natural on the subject of the lethal mayhem associated with Islam, having been the lead prosecutor in convicting Omar Abdel Rahman (“The Blind Sheik”) who encouraged the 1993 bombing of the World Trade Center. In Willful Blindness, A Memoir of the Jihad, his 2008 book about that federal case, McCarthy recounted his dawning realization that barbarities like the bombing were fully justified by Islam’s hate-filled fundamental texts.