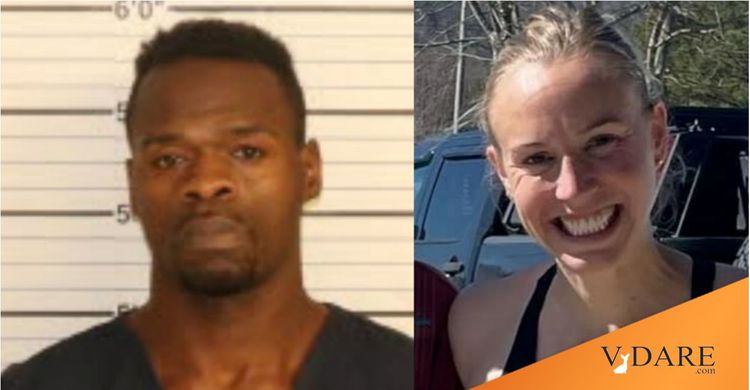 A simple confession: I wish I didn’t care about this stuff. Life would be simple.

But just over a decade ago, a childhood friend was murdered on the streets on Atlanta by a black male dedicated to fighting white privilege and thus was born the character behind SBPDL.

In the dying days of the American Empire, we know more names will emerge to share the same fate as Brittney Watts.

Her Name is Eliza Fletcher.

A body was found in Tennessee Monday amid a search for a missing Memphis teacher Eliza Fletcher, cops said.

The Memphis Police Department said that a “deceased party” was discovered in the area where the woman went missing at about 8 p.m. The identification of the body was not immediately confirmed.

Fletcher, 34, vanished Friday after being violently abducted during her early-morning jog.

Cleotha Abston was charged Sunday with especially aggravated kidnapping in her snatching. His motive for kidnapping the mom of two remains unclear.

Fletcher, who comes from a pedigreed Tennessee family that founded a $3.2 billion private hardware company, was allegedly abducted by Abston around 4:30 a.m. Friday.

Tennessee authorities obtained surveillance footage of the kidnapping, which appeared to show Abston running “aggressively toward the victim, and then [forcing] the victim Eliza Fletcher into the passenger’s side of the vehicle,” according to a police affidavit which also said, “there appeared to be a struggle.”

Police described Fletcher’s abduction as “violent” and said it is believed that she “suffered serious injury.”

“Further, it is probable and apparent from witness statements that these injuries left evidence of blood in the car the defendant cleaned,” it continued.

Abston was arrested but authorities said he refused to tell them Fletcher’s location. He was busted after a good Samaritan found sandals at the scene of the crime with DNA linking him to the alleged kidnapping.

Neighbors described Abston as a “creep” and “pervert” who constantly tried to pay women for sex, according to a report.

Fletcher was a married mom of two young boys and an elementary school teacher.

Memphis is 64 percent black, and 25 percent white in 2022. The man arrested for the murder of Eliza Fletcher, a white mother of two white boys, is black.

Were white privilege real, every individual connected to the black male who abducted and murdered Eliza Fletcher would be facing consequences. Consider how the concept of white privilege is taught in schools and how all white children must atone for their ancestors’ past….

In a world where white privilege was real and omnipresent, every black individual who dared take the life of an innocent white person would see their entire family, to the fourth generation, face dire consequences.

The American Experiment is ending.

The architects of Jim Crow knew the truth, though our Marxists overlords demand we forget.

With every Eliza Fletcher, the sting of reciting Emmitt Till’s memory loses its potency.