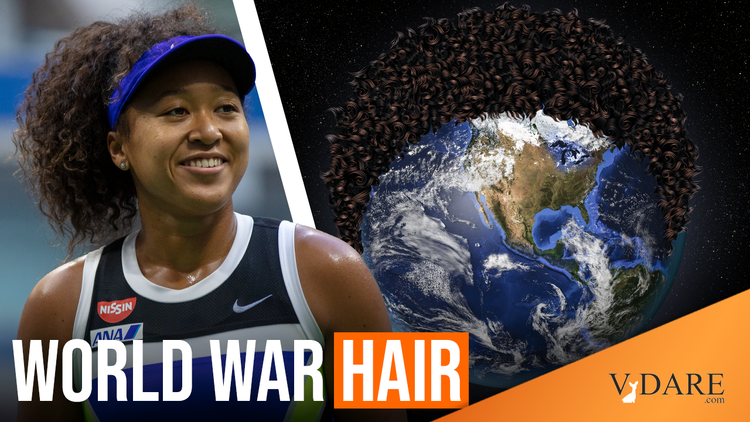 Two years ago, the half-black Naomi Osaka politely stood by while Serena Williams screamed at a tennis official over something or other during the final of the US Open women’s tennis tournament, a tantrum that launched a 1000 op-eds by Angry Strong Black Women about how Angry Strong Black Women like Serena deserve to act like jerks due to 1619 and redlining and, worst of all, society’s prejudice against Black Hair.

This year, Osaka correctly surmised that the way to get on the side of the media was not to be a polite Japanese but to go the Full Angry Strong Black Woman, wearing masks featuring the names of various black lowlifes who have come to grief.

This piece has been updated to reflect Naomi Osaka’s victory on Saturday in the 2020 U.S. Open women’s finals. She defeated Victoria Azarenka two sets to one to claim her third Grand Slam.

Naomi Osaka’s hair doesn’t matter. At least not when it comes to her 120 mph serve, her daunting forehand or her powerful baseline play. But it does matter in terms of how she shows up in the tennis world and how she’s emerged as one of the most prominent athletes supporting the Black Lives Matter protests.….

Alongside her outstanding athleticism, though, Osaka has grabbed headlines this tournament by wearing masks emblazoned with the names of victims of racial violence: Philando Castile, Trayvon Martin, Ahmaud Arbery, George Floyd, Breonna Taylor and Elijah McClain. Black masks, white lettering. Her one-person protest feels even more powerful as she enters and exits the nearly empty stadium every match.

The masks draw our eyes up, but this is nothing new when it comes to Osaka. With her thick hair often pulled into a high ponytail and up through a visor, Osaka is accustomed to making a statement. It’s the sort of statement that Black bodies always make, whether intended or not, in predominately white spaces. As Claudia Rankine wrote about Serena Williams in “Citizen: An American Lyric” — referencing Zora Neale Hurston — Black players appear against the sharp white backdrop of the tennis world.

There are more Black female professional tennis players today than there were when sisters Serena and Venus Williams made their Gland Slam debuts in the late 1990s. But the way these women show up — how they present themselves and how their bodies get read by others — is no less a topic of conversation today, and, yes, as much a form of everyday resistance as it was when Venus Williams protested being penalized for losing hair beads while playing in 1999.

Whether it’s colorful beads that clack or hair pieces attached at the back, Black women’s hair gets noticed especially by white onlookers. However, with more Black players on the courts and shifting public discourse about what’s appropriate to say about Black bodies, younger players are more likely to be interviewed about their beauty rituals and personal style. Osaka has been profiled in numerous magazines like Vogue and Elle, and on websites like Refinery29.

Black women with natural hair that has not been chemically straightened or relaxed can relate to the way Osaka talks about her curls, the way her hair reacts to humidity and its propensity for dryness. We can relate to her laughing at the unruliness of her hair as its best and worst quality. She watches YouTube tutorials and uses Miss Jessie’s styling products, just like so many other Black women with natural hair.

It’s this relatability that delights and should not be underestimated, especially given Osaka’s multiracial heritage. She was born in Japan, but grew up in the U.S.; her father is Haitian and her mother, Japanese; she relinquished her U.S. citizenship for Japan and plays under its flag but lives in Los Angeles and has been a vocal supporter of BLM. She emphatically describes herself as a Black woman, but also as multiracial. She has said she doesn’t quite feel American or Japanese or Haitian.

… Osaka’s hair bouncing in a few different directions as she darts across the tennis court, sometimes with her curl pattern defined and other times in more of a frizzy cloud, attracts attention and resonates with audiences beyond the U.S. Just as being Black and (not “or”) multiracial in the U.S. involves upturning racial thinking, being Black and Japanese challenges long-held beliefs about Japan as monoethnic.

Osaka and other BLM protests are shining a light on racism in Japan, inspiring discussions about what it means to be Japanese and about the lives of the country’s multiracial population. Some are now questioning why people with mixed heritage are referred to as “hafu” (or half), suggesting they’re somehow less Japanese than others. She’s widely regarded not just as a Japanese celebrity but as a role model for her talent and social activism….

It’s the fluffy curliness of Osaka’s hair that makes it stand out against that sharp white backdrop of the tennis world because it represents her agency, not just her body.

While hair may not seem like a big deal, it is….

Also, remember that Race Does Not Exist.