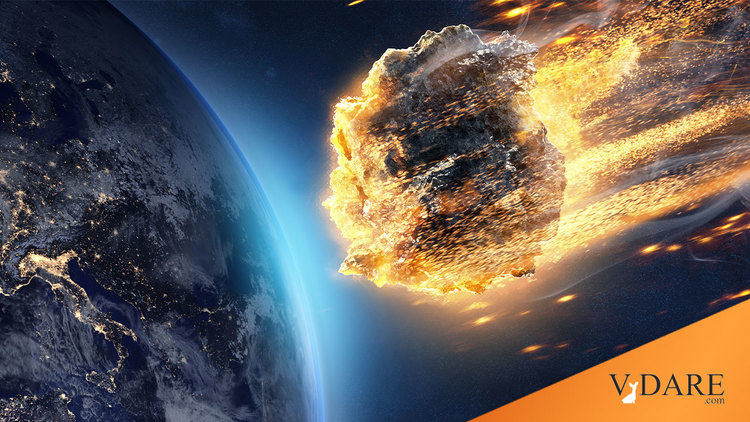 NASA's Planetary Defense Plan to Save the Earth from an Asteroid

For two decades, NASA researchers have been shooting at meteorites with a high speed gun because, well, wouldn’t you if you got a government grant to blast away at meteorites?

To be clear, they’re not shooting at moving meteorites but at ones they bought from private dealers:

Deflecting an Asteroid Before It Hits Earth May Take Multiple Bumps

After years of shooting meteorites with a special gun owned by NASA, researchers highlighted challenges for a preferred method of planetary defense.

There’s probably a large space rock out there, somewhere, that has Earth in its cross hairs. Scientists have in fact spotted one candidate — Bennu, which has a small chance of banging into our planet in the year 2182.

According to NASA, Bennu is 500 meters across and ugly as sin:

Using NASA’s Deep Space Network and state-of-the-art computer models, scientists were able to significantly shrink uncertainties in Bennu’s orbit, determining its total impact probability through the year 2300 is about 1 in 1,750 (or 0.057%). The researchers were also able to identify Sept. 24, 2182, as the most significant single date in terms of a potential impact, with an impact probability of 1 in 2,700 (or about 0.037%).

I’ve never hated a rock before, but the more I look at Bennu, the more I hate it.

Back to the NYT story:

… In the 1960s, scientists began seriously considering what to do with an asteroid on a collision course with our planet. The leading idea back then was to launch a projectile that would shatter the space rock into pieces small enough to burn up in Earth’s atmosphere, said George Flynn, a physicist at State University of New York, Plattsburgh. But scientists have since come to realize that achieving such a direct, catastrophic hit is a serious challenge.

The thinking is different today, and it’s not the Hollywood version with a nuclear bomb, either. Rather, the current leading idea is nudging an incoming asteroid aside. The way to do that, scientists generally agree, is deliberately setting up a collision between an asteroid and a much smaller, less massive object. Known as kinetic impact deflection, such a collision alters the trajectory of the asteroid ever so slightly, with the intent that its orbit changes enough to pass harmlessly by Earth.

… In 2003, Dr. Flynn, Dr. Durda and colleagues began firing projectiles at meteorites to test the limits of kinetic impact deflection. The goal was to figure out how much momentum could be transferred to a meteorite without shattering it into shrapnel that could continue on a similar orbital path through the solar system.

“If you break it into pieces, some of those pieces may still be on a collision course with Earth,” Dr. Flynn said.

… Over the course of many years, the researchers amassed 32 meteorites, most purchased from private dealers. (The largest, roughly the size of a fist and weighing one pound, cost the team about $900.)

…The team turned to an Apollo-era facility to test how the meteorites responded to high-speed impacts. NASA’s Ames Vertical Gun Range in California was built in the 1960s to help scientists better understand how moon craters form. It’s capable of launching projectiles at over four miles per second, far faster than a rifle.

“It’s one of the few guns on the planet that can shoot things at the speeds characteristic of impacts,” Dr. Flynn said. …

The goal was to determine the point at which a meteorite stops being simply nudged by an impact and instead starts to fragment.

… Next year, researchers will test kinetic impact deflection on a real asteroid in the solar system for the first time with NASA’s Double Asteroid Redirection Test (DART) mission. The spacecraft’s target asteroid, a roughly 525-foot piece of rock known as Dimorphos, is in no danger of hitting Earth, however. The mission is expected to launch in November.