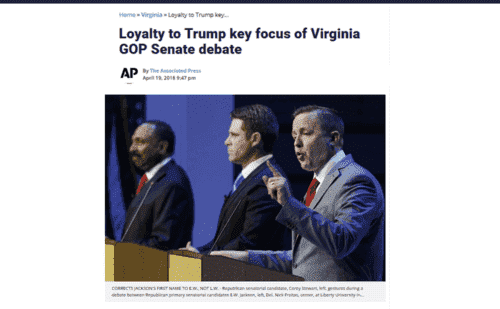 President Trump can do much on immigration by using his presidential powers. But for permanent immigration reform, he needs Congress to pass laws.

The good news:  potential allies are emerging. Republican primary candidates are supporting and emulating Trump on immigration, even competing to show who is the better Trumpster.

Granted, everything in elections is provisional. Many candidates don’t live up to what they promise. But this year more Republican candidates sound much better, and seem better informed, on immigration.

This isn’t a partisan issue. We would welcome Democrats who speak reasonably on immigration. But they’re a dying breed, leaving improvement in GOP candidates the best hope for the future.

Recent primaries included those on May 8 (North Carolina, West Virginia, Indiana and Ohio), May 15 (Pennsylvania), and May 21 (Virginia’s 6th Congressional District). More are scheduled for May 22.

Regarding those on May 8, even The New York Times reported some really good news:

Not one Trump critic won a Republican primary. The major Republican candidates cast themselves as Trump allies and in some cases explicitly invoked him as a role model…. Even the more traditional Republicans mimicked Mr. Trump

[6 Takeaways From Tuesday’s Primary Elections, By Alexander Burns and Jonathan Martin, May 9, 2018].

The Washington Post put it this way, focusing on the fate of incumbents:

Republican members of the House fared especially poorly Tuesday in primaries across four states, offering fresh evidence that this fall will bring another change election and a new batch of outsiders promising to shake up Washington

Good, because Washington needs some shaking up.

Pittenger had a good record on immigration, with an A- from Numbers USA , although that rating reveals Pittenger scored an F- in one category: “Reduce Unnecessary Worker Visas.”

In the upcoming general election on Nov. 6, Harris faces Dan McCready, an evangelical Christian campaigning as a centrist who is way ahead in fundraising.

This could be a tough one, so Harris should use immigration to his advantage.

In North Carolina’s District 3, Walter Jones, with an A+ and True Reformer status from Numbers USA, defeated two opponents, both of whom were also True Reformers.  No matter who won that one, it would have been a victory for immigration patriots.

Jones is unopposed on November 6.

In seven of North Carolina’s 13 congressional districts, the Republican candidate is a True Reformer.

West Virginia Sen. Joe Manchin is as good as it gets for Democrats. With a C from Numbers USA, Manchin has the highest grade for any Democrat on Capitol Hill.

Check it out here and note that a near-unanimous 95% of congressional Democrats have an F- for this Congress, making ole Joe look almost Trumpian.

As Attorney General, Morrisey has fought Obama Amnesties, so his victory is probably a good sign.

The big news in Indiana: the victory of Mike Braun, according to the May 9 New York Times round-up quoted above, “a wealthy former state legislator” who “won the Republican Senate primary by branding himself as a Trump-like businessman and outsider.” Braun is considered a True Reformer by Numbers USA. [6 Takeaways From Tuesday’s Primary Elections,By Alexander Burns and Jonathan Martin, May 9, 2018]

That all sounds good. Braun defeated two congressmen, Reps. Luke Messer of the 6th district and Todd Rokita of the 4th. Each has a B+ from Numbers USA, which calls them True Reformers.

So all three candidates were relatively good on immigration.

On Nov. 6, Braun faces incumbent Democratic Sen. Joe Donnelly, who with a C- from Numbers USA, is, disgracefully, actually one of the best Democrats on  immigration.

In the 6th District, Greg Pence, brother of the Vice-President, won the Republican primary and will almost surely win on Nov. 6. The 6th hasn’t sent a Democrat to Congress since 1992. [Greg Pence, Vice President’s Brother, Likely Coming to Congress, by Simone Pathé, Roll Call, May 8, 2018]

Let’s see how he develops on immigration. He says one of his priorities is “protecting our borders”. [Greg Pence For Congress.com]

But at least Renacci’s C makes him better than his Democratic opponent in the general election, incumbent Sherrod Brown. He has an F-.

And immigration-wise, it’s worth observing, the top three members of Ohio’s congressional delegation are immigration patriots:  District 4’s Jim Jordan (A+), Warren Davidson of District 8 (A), and Steve Chabot of District 1 (A-).

Gonzalez didn’t respond to the Numbers USA survey (maybe it got buried in correspondence), but his website indicates support for border control.

We need Congress to pass comprehensive reform that prioritizes both our national security and our economic prosperity. We cannot continue to punt on this obligation by relying on executive order after executive order. A legislative answer to our immigration challenges should focus on:

The big news in the Keystone State is the triumph of Rep. Lou Barletta, who won the Republican primary for the Senate [Lou Barletta wins Republican Senate primary in Pennsylvania, by Dave Boyer, The Washington Times, May 15, 2018]. Barletta has an A+ from Numbers USA, is a True Reformer and has been in the trenches since becoming famous as a mayor who thought immigration law ought to be enforced.

The challenge is this: Barletta, who represents Pennsylvania’s 11th District, must face incumbent Democratic Sen. Bob Casey, Jr. Though Casey has an F- from Numbers USA for this Congress, he’s also the son of the late Gov. Bob Casey, a popular and very rare pro-life Democrat. Casey Jr. could be hard, but not impossible, to beat.

Pennsylvania has 18 House districts. True Reformers are running in three of them.

In the Old Dominion’s 6th District, as A.W. Morgan reported here, Del. Ben Cline prevailed in a race against Cynthia Dunbar, a hard-core evangelical, to replace the retiring incumbent, Bob Goodlatte. Both candidates were Trumpsters, and Cline had a good note on his website about immigration.

Also in Virginia, two of the three candidates running for the chance to fight incumbent Democrat Sen. Tim Kaine, a Marxist sympathizer and Open Borders enthusiast, are allied with Trump: Corey Stewart and E.W. Jackson.

That primary, along with the rest of the congressional primaries, are June 12.

CONCLUSION: Those concerned about the National Question must pay attention to the primaries. It’s great news that so many candidates across the country are fighting for a responsible immigration policy. Sometimes they even compete with each other, as these primaries show.

Of course, it would be great if all candidates, other differences regardless, agreed on the importance of guarding our borders and sovereignty, and protecting our culture and American workers

Aren’t they all supposed to be loyal Americans.

Don’t answer that question. I can dream, can’t I?