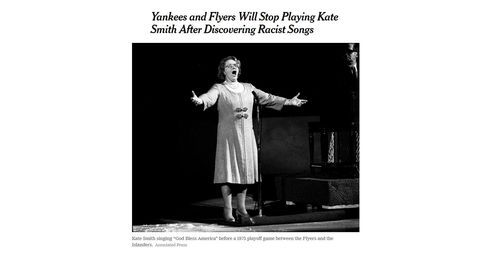 For the Yankees, Kate Smith’s version of “God Bless America” was a staple of the seventh-inning stretch since 2001.

For the Philadelphia Flyers, the connection was even tighter, with Smith serving as a mascot of sorts for the team’s 1970s Stanley Cup winners, and performing live at games.

Now both teams have announced they will stop playing Smith’s version of “God Bless America” after discovering that she sang songs with racist lyrics in the 1930s. The Flyers will also cover a statue of Smith that has been in front of their arena since 1987.

Smith, who died in 1986, is most closely identified with “God Bless America,” but she recorded numerous other songs over her long career. Among them were “Pickaninny Heaven” and “That’s Why Darkies Were Born,” which contain disturbing lyrics that demean black people. …

The Flyers said in a statement: “We have recently become aware that several songs performed by Kate Smith contain offensive lyrics that do not reflect our values as an organization. As we continue to look into this serious matter, we are removing Kate Smith’s recording of ‘God Bless America’ from our library and covering up the statue that stands outside of our arena.” 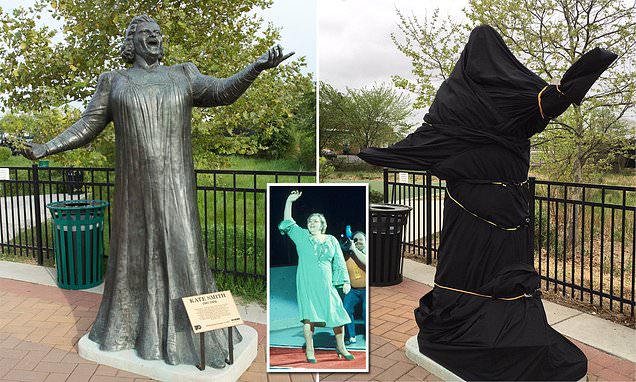 The Flyers have a tradition of playing Smith’s version of “God Bless America” as a replacement for the national anthem at big games. The song has been said to bring the team good luck. Smith performed it live before Game 6 of the 1974 Stanley Cup final, the game in which the Flyers won their first Cup. …

“To have shaped pop music in this country necessarily implicates musicians and songwriters in a history of racial exchange, impersonation and appropriation,” Magee said. “Kate Smith was inexorably part of that. She became a pop star on a foundation of songs like these.”…