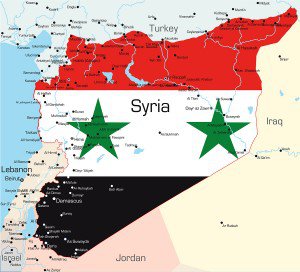 Jeb Bush has spent the week debating with himself over whether he would have started the war his brother launched on Iraq.

When he figures it out, hopefully, our would-be president will focus in on the campaign to drag us into yet another Mideast war—this time to bring down Bashar Assad's regime in Syria.

While few would mourn the passing of the Assad dynasty, there is a problem: If Assad falls, a slaughter of Christians will follow and the battle for control of Damascus will be between the Syrian branch of al-Qaida, the Nusra Front, and the crazed terrorists of the Islamic State.

Victory for either would be a disaster for America.

Where is the evidence of an unholy alliance to bring this about?

Turkey, which turned a blind eye to ISIS volunteers slipping into Syria, has aided the Nusra Front in setting up its own capital in Idlib, near the Turkish border, to rival the ISIS capital of Raqqa.

Why would Turks, Saudis and Qataris collude with Sunni jihadists?

Turkish President Recep Tayyip Erdogan detests Assad. The Saudis and Gulf Arabs are terrified of Shiite Iran and see any ally of Tehran, such as Assad, as their mortal enemy.

This also explains the seven weeks of savage Saudi bombing of the Houthi rebels, who dumped over a U.S.-Saudi puppet in the Yemeni capital Sanaa, then seized the second and third cities of Taiz and Aden.

But while the Houthis bear no love for us, they have been fighting al-Qaida in the Arabian Peninsula. Thus, the Saudi bombing has given AQAP, the most dangerous terrorist foe we face, freedom to create sanctuaries and liberate hundreds of fellow terrorists from prison.

The Israelis seem to be in on the game as well. While they have taken in rebels wounded on the Golan Heights and returned them to their units, there are reports of Israel aiding the Nusra Front with intelligence and even air strikes.

This week, an Israeli official bluntly warned that Hezbollah has amassed 100,000 short-range rockets capable of striking northern Israel, thousands of which could hit Tel Aviv. The rockets are said to be hidden in Shiite villages in southern Lebanon.

Israel is preparing, writes The New York Times' Isabel Kershner, "for what it sees as an almost inevitable next battle with Hezbollah."

As Hezbollah has been the most effective fighting ally of Assad, an Israeli war on Hezbollah could help bring Assad down.

But, again, who rises if Assad falls? And who else, besides Christians and Alawites, starts digging their graves?

As one might expect, Sen. Lindsey Graham is all in. Late in April, he declared, "Assad has to go. ... We're going to have to send some of our soldiers back into the Middle East."

"I would integrate our forces within a regional army. There is no other way to defend this nation than some of us being on the ground over there doing the fighting."

Wednesday, The Washington Post laid out the game plan for war on Syria. While we cannot create a NATO with kings, emirs, sheiks, and sultans, says the Post,

"[T]here is a way that Mr. Obama could serve both  U.S. interests and those of the Gulf allies: by attacking the Middle East's most toxic, and destabilizing force, the Bashar al-Assad regime in Syria. Syria's dictatorship is Iran's closest ally in the region, and its barbarity opened the way for the rise of the Islamic State. Recently, it has suffered battlefield reverses, in part because of increased Gulf aid to rebel forces.

"If Mr. Obama were to ... create safe zones in northern and southern Syria for the rebels, the balance could be tipped against Damascus and Tehran—and U.S. allies would have tangible reason to recommit to U.S. leadership."

Consider what is being recommended here.

The Post wants Obama to bomb a Syrian nation that has not attacked us, without congressional authorization—to aid rebels whose most effective fighters are al-Qaida and ISIS terrorists.

And we're to fight this war—to nullify ultra-rich but unhappy Gulf Arabs?

Obama must also "do more about Iranian aggression," says the Post.

But against whom is Iran committing aggression?

Bottom line: A U.S. attack on Syria is being pushed by the War Party to propel us into a confrontation with Iran, and thereby torpedo any U.S. nuclear deal with Iran.

Cui bono? For whose benefit?