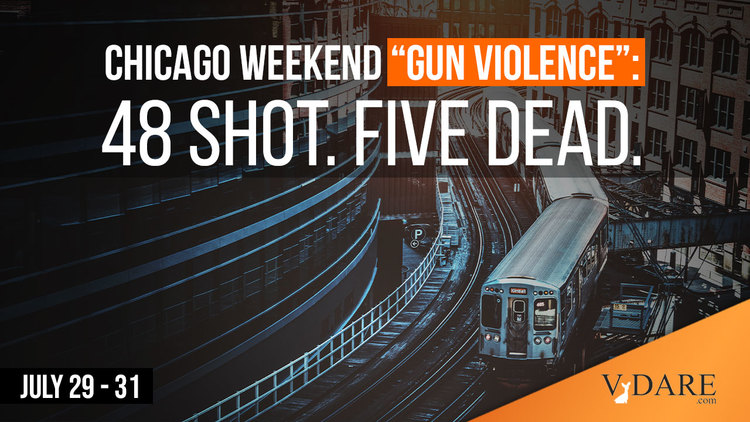 The last year we have clear data on the race of suspects in Chicago shootings comes back in 2011, when the Chicago Police Department confirmed 95 percent of homicide suspects are black or brown. Whites were only four percent. [Blake Masters IS RIGHT! “Black People, Frankly” DO Commit Almost All Gun Crime In U.S., by Jack Dalton, VDARE.com, June 23, 2022]

HeyJackAss.com, which has been documenting shootings in Chicago for years, confirms this number is basically the same for 2020, with blacks responsible 77.8 percent of shootings and Hispanics 16.6 percent.

At least 48 people were shot, five fatally in weekend shootings across the city, Chicago police said.

A 16-year-old boy and a man were stopped at a red light in the 4700-block of South Kedzie Avenue in Brighton Park about 2 a.m. Sunday when someone opened fire, police said. Their car crashed into a tree in the 4600-block of South Kedzie Avenue. The 16-year-old boy was shot in the head and taken to Mount Sinai Hospital, where he was pronounced dead, police said. The man, 19, suffered a graze wound to the head and was transported in good condition to Saint Anthony Hospital.

Early Saturday, a 31-year-old man was standing near a sidewalk in the 1800-block of North Milwaukee Avenue when someone in a car approached and opened fire around 1:40 a.m., Chicago police said. He was taken to Illinois Masonic Medical Center, where he was pronounced dead.

Half an hour earlier, another man, 31, was fatally shot while stopped at a red light in Gresham on the Far South Side. The man was a passenger in the car in the 2000-block of West 87th Street when two people in a black sedan drove by and fired at least 40 shots about 1:10 a.m., police said. He was taken to Christ Medical Center in Oak Lawn, where he was pronounced dead. A woman, 25, suffered multiple gunshot wounds and was taken to the same hospital in critical condition, police said. Another man, 22, was shot multiple times and was taken to the University of Chicago Medical Center, where he was listed in critical condition, police said.

A man was fatally shot Saturday morning on the Bishop Ford Freeway near 130th Street, according to Illinois State Police. State troopers responded to the shooting about 11:40 a.m. and found a person with gunshot wounds, state police said. The man was taken to a hospital and pronounced dead, officials said. Police say shell casings were recovered from the road. No one was in custody. The northbound lanes of Interstate 94 were shut down for several hours as police investigated.

The question we aren’t supposed to ask: had the great replacement not occurred in Chicago (Chicago was 92 percent white in 1940, just before our entry into World War II), would we have any need to be tallying up fatal/nonfatal shootings in the Second City as sport?