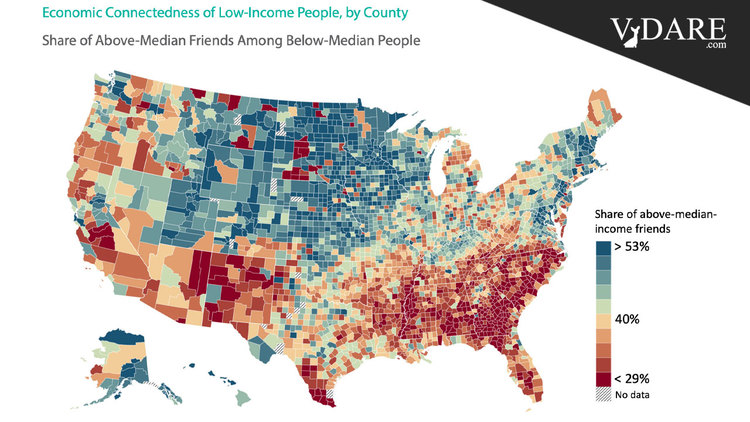 Raj Chetty: Charles Murray Was Right In COMING APART But Let‘s Obscure It

In his struggle to figure out how America works, Harvard economist Raj Chetty has crunched billions more bits of data, this time from Facebook regarding who friends whom, and created yet another map showing where black people, American Indians, and Hispanics live, proving once again that rural Minnesota is a more cooperative place than rural Mississippi, and that Mormon districts are more upwardly mobile economically than Indian reservations: Five years ago, Chetty began publishing his “Equality of Opportunity Project” results. He had somehow talked the IRS into giving him the numbers on tens of millions of (purportedly confidential) 1040 tax returns, from which he could look at the income of parents in the 1990s and their now-adult children in the 2010s. …

Chetty’s original goal was to find which places in the country had strong upward income mobility so that their secrets of good governance could be uncovered and spread nationwide.

Unfortunately, as I had immediately pointed out, Chetty’s celebrated 2013 map of where in America there was particularly weak upward income mobility mostly appeared to be a map of Indian reservations and heavily black parts of the country. It should not have been surprising, when you stop and think about it, that when blacks regress from one generation to the next toward their mean income, they regress toward a lower mean than do whites.

But who stops to think about such matters?

Chetty, being an Indian immigrant, hadn’t apparently noticed how obvious it was that his 2013 results were being driven not by some subtle secret sauce of local administration, but by the brute fact that blacks and American Indians do poorly at being economically productive in modern America. He tried to hide his results by redefining heavily black areas as suffering not from being heavily black but from “segregation.” …

In my experience over the past five years, Chetty has repeatedly dredged up fascinating data. For example, my long 2015 Taki’s column on “Where’s the best place to move for your children’s sake?” pointed out that Chetty’s specific findings were highly plausible (e.g., the worst county to move your children to is the tragic Pine Ridge Indian reservation in South Dakota). Yet Chetty has a hard time interpreting his own numbers because his results have been so politically incorrect.

Now, Chetty is back at trying to figure out the geography of economic mobility. Why were white kids raised by below average income parents in white communities in the upper Midwest and the Great Basin more likely to rise up the income scale than black kids raised in black communities?

The secret, he has just now discovered, is who friends whom on Facebook. In counties where people below the national median income have an above the national average percentage of Facebook friends with above average incomes, kids are more likely to rise up the income pyramid.

He labels his breakthrough “economic connectedness.” It’s not what you know, it’s who you know.

That sounds pretty plausible, but when you look at Chetty’s data, it turns out pretty lame. Let’s look at the top 20 counties with at least 800,000 residents on Economic Connectedness:

Is San Francisco famous for extending a hand up to striving working class folk? Is Nancy Pelosi writing letters of recommendation for out-of-work truck drivers she’s friends with on Facebook? Of course not. These are just affluent counties where most residents are above average in income so, unsurprisingly, below average income residents happen to know more above average income people than in poorer counties.

Here are the bottom 20 counties:

But still, Chetty is probably onto something but he’s not courageous to come out and make it clear:

One thing that Chetty has repeatedly shown with his data is that large parts of the rural upper Midwest (e.g., Minnesota and Iowa) and the upper Rockies (e.g., Utah and other Mormon districts) have impressively healthy social conservative mores.

Similarly, Mormon regions keep coming out near the top of Chetty’s rankings. I wouldn’t be surprised if this has a lot to do with the lack of class divide among Mormons. For example, Charles Murray’s landmark 2012 book Coming Apart complained about how upper middle class white people (the residents of Belmont) were failing to give good advice to lower class white people (the residents of Fishtown).

Whatever you think of Mitt Romney, a real-life resident of Belmont, MA, as a politician, you have to give him credit as the Mormon elder of the Boston region for taking one day a week in the prime of his career when he could have been becoming a private equity billionaire to devote to sorting out the problems of Boston area Mormon screw-ups. That Mormons are less likely to be screw-ups has a lot to do with the fact that Mormon high achievers like Romney take time off to offer guidance to marginal Mormons. t’s time for my August triennial fundraiser. I need a new car to replace my 1998 Infiniti. And dog food for Lambo:

Donate at Unz.com (The links wouldn‘t work if we embedded them here) 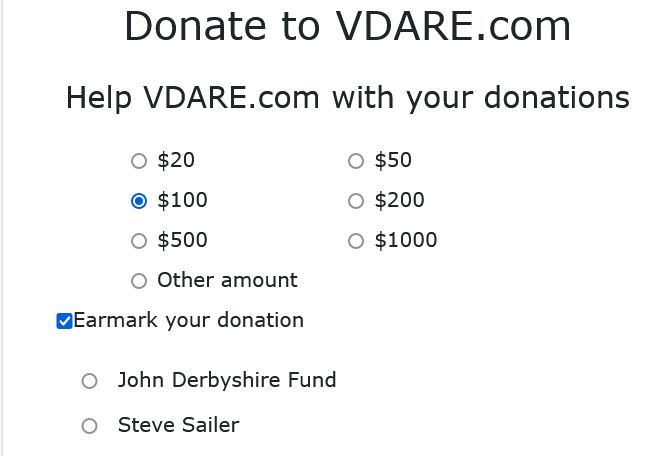