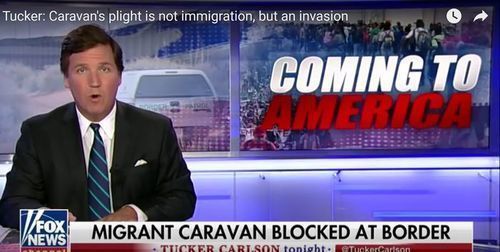 The Caravan Is an Invasion, Tucker Carlson Explains

Tucker Carlson concisely clarified the forces and symbols being played out in the border confrontation now occurring between caravan pests from Honduras and American citizens: the Hondurans are invaders, which they demonstrate by waving their flag. Immigrants, as Tucker points out. Leftists believe the billions of less fortunate of the world have the right to move anywhere they want — which would be chaos, of course.

In contrast, real immigrants want to contribute to their new country and to assimilate to the culture they have chosen to join.

Below, the front page of the Washington Post on April 30 featured a photo of invasive illegal aliens waving their Honduran flag as they demanded to be admitted to the U.S.

TUCKER CARLSON: Over the past month a caravan of Central American migrants has gradually made its way up from Honduras through Mexico all the way to Tijuana opposite San Diego. At one point, Mexican authorities claimed they broke up the group, and American media of course dutifully reported that they did, but they didn’t; that was just a PR gesture and a temporary one.

In fact, during parts of the trip, Mexican police escorted the migrants northward. In other words, the Mexican government abetted illegal immigration into this country, as it has done for many years. Well tonight the caravan is on our southern border. Rather than wait for the crossing station in San Ysidro to open, many of them just jumped the fence.

Some waved Honduran flags when they got to the top. And that tells you everything. When you arrive in a country to contribute to it and to assimilate into its culture, you don’t wave the flag of a foreign nation. That’s when you do in triumph when you invade a country. According to border control, at least one member of the caravan has already admitted to being a member of MS-13.

All of this should worry us. There are only a few hundred people in this caravan, but there are billions more around the world who live amid violence and poverty, and virtually every single one of them would like to relocate to San Diego. The Left argues we have no moral right to stop any of them from doing that.

Here’s attorney Nichole Ramos of Tijuana denouncing the US government as criminal for trying to enforce our own federal law. Watch.

NICHOLE RAMOS: The message for Customs and Border Protection: Stop rejecting asylum seekers at the port of entry, you know what you’re doing, you know you turn people away; you complain that they are breaking the law by entering illegally. You are breaking the law, and you are forcing them to break the law that’s why we have Caravan.

CARLSON: Yeah it’s definitely someone you want in control over public policy, screaming into a bullhorn. This is not immigration: immigration happens with the consent of the host country. This is happening by force without our consent. A government that cared about its own citizens wouldn’t allow it to happen.

Bad things happen when you leave the door open. Every homeowner knows that. The Left is demanding that we leave our door open. Any attempt at self defense is immoral, they tell us from the safety of their segregated neighborhoods where they all live. Illegal immigrants are amazing people, they say — far better than you are, Mister Entitled American. . .