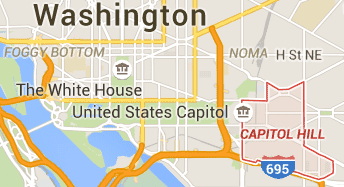 The Capitol Hill Crime Wave: Liberals Getting Mugged in Reality

Capitol Hill in Washington, D.C., is one of the most liberal neighborhoods in the country. In 2012, President Obama won Ward 6, which includes Capitol Hill, with 87.3 percent of the vote.

The Hill has remained firmly Democratic even as African-Americans have moved out and white professionals have moved in. In 2000, Ward 6 was 64 percent African-American; by 2010, with gentrification rapidly increasing, the black population had fallen to 43 percent.

Over the past six months, the neighborhood, where the crime rate is surging, has become a case study in the conflict between those calling for more lenient policies toward criminals and those who see arrest, prosecution and jail as the most effective deterrents of crime.Capitol Hill, where I live, is, in effect, a test case in the national debate over high incarceration rates, the elimination of mandatory sentencing, the decriminalization of lesser offenses, including drug possession, and President Obama’s recent decision to grant clemency to federal inmates convicted of nonviolent drug offenses.

Nationally, advocates of leniency appear to have gained the upper hand. Public figures from Hillary Clinton to Ta-Nehisi Coates, a recent recipient of a MacArthur Foundation “genius” grant, have argued that unnecessarily harsh sentencing has damaged the prospects of black men...

Some prominent conservatives have also voiced support for sentencing reform. The organization Right on Crime– backed by Newt Gingrich, Grover Norquist and Jeb Bush — contends that prisons are not the solution for every type of offender. …

That may be what’s happening on the national level but locally, it gets complicated, especially in more liberal neighborhoods.

A 22.3 percent increase in violent crime over the past year on Capitol Hill is driving the debate. From mid-October 2013 to mid-October 2014, there were 298 such crimes: robberies, assaults with a deadly weapon, rape and murder. For the same period in 2014-2015, there were 364 such crimes, according to the Metropolitan District Police.

Conservatives believe increased violence stems from the reluctance of police officers to aggressively enforce the law in the wake of the rioting in Ferguson, Mo. in August, 2014 and in Baltimore last April after the deaths of Michael Brown and Freddie Gray — the so-called “Ferguson effect.”

Police officers and other public officials in the District of Columbia also point to a new volatile class of synthetic street drugs: “They can go from half asleep to combative and raging,” Holly O’Byrne, a paramedic, told The Washington Post, noting that “The drug is a game changer.”

The results of the spike in crime are reverberating across the Capitol Hill neighborhood. On the local listserv, newhilleast – an email network of residents who live within a few blocks of the United States Capitol — a single subject line crops up repeatedly: “DC’s Reign Of Terror.”

A small sampling of recent day-in, day-out neighborhood crime highlighted on the listserv includes a midafternoon sexual assault on a mother by an intruder who “violently beat and assaulted her while she worked from home”; a flash mob attack on a local 7-Eleven; and the videotaped beating of a 69-year-old man by a 19-year-old at a subway exit.

… The escalation in crime has revealed a split within the generally progressive community of Capitol Hill.

On one side are those demanding tougher arrest and prosecution policies: “The biggest problem is that prosecutors are not prosecuting,” said Denise Krepp in an interview. Krepp, a former Obama administration appointee and now an Advisory Neighborhood Commissioner, is especially angry about random assaults. (There are 299 Advisory Neighborhood Districts in the city and each one elects a commissioner.)

In the Oct. 1 issue of the Hill, a newspaper covering Congress and the surrounding area, Krepp wrote:

Every morning, neighbors greet each other as they walk their dogs or walk to the metro to get to work. Our small-town life was horribly disrupted when an elderly neighbor was hit by an individual a third of his age. It was 8 a.m., the sun was shining, and out of the blue he was clocked in the face. The police call this type of assault a “simple assault.” My neighbor sustained dark black bruises but no stitches were required.

In the interview, Krepp described her view of how laws should be enforced: “If you hit one of my residents, you are going to jail. You don’t get a free swing at someone.”

Capitol Hill is more or less the neighborhood where pundit Matthew Yglesias was the victim of two black males Polar Bear Hunting on 5/15/2011.

On the other side are those who believe that it is more important to address the social, racial and economic factors behind crime.

“I actually think we should care why these individuals are committing these crimes. If we don’t know why then how will we prevent it? In other words, we need to understand the cause not just focus on the symptom,” Ned Malone wrote on newhilleast.

Sarah A. Spurgeon posted a comment there that reflects the complexity of the issue of crime for many Hill residents:

These mostly juvenile offenders are engaging in violent crime because they can without any serious repercussions, plain and simple. While I agree we need to address deep rooted social issues, like economic inequality and institutional racism, that may be the fundamental source of these crimes, the more immediate reason they are engaging in violent crime is because the deterrent is so low. So yes, while we need to continue to invest in addressing social problems — and it should be noted that DC has many, many services and social programs that can be taken advantage of — there are more expedient and effective measures for this recent surge in violent crime. Our political leaders must have the courage to increase the immediate and sustained penalties for juveniles and others who engage in violent, criminal behavior. No, we cannot arrest our way out of this problem, but we can ensure there are meaningful consequences for those who are arrested. Currently, it appears that those who rob by force (i.e., via assault or with a gun) are released to their guardians and are never prosecuted.

Richard Lukas, another resident, takes a more aggressive posture on the listserv: “We are being terrorized by a small percentage of ‘irrational actors’.”

What can be done? “Nothing.” Public officials, Lukas argues,

are loathe to address publicly what we all know privately: There is a very active segment of marauding at-risk youths who find satisfaction from terrorizing people on a daily basis.

Daniel Chao, a Democratic congressional staffer and an Advisory Neighborhood Commissioner, made several points in an interview: “the underlying issue is a lack of jobs, an economy that does not perform for a group of people.” He noted that poor people in public housing on the Hill are “living in constant fear of crime,” reluctant to report offenses because the person arrested is often back on the streets within hours. Chao believes the police “are doing everything they can, but they catch people and next day they are released.”

One of the more outspoken contributors to newhilleast is Margaret Holwill, a 40-year Hill resident who is angered by the fact that teenagers’ records are secret. She writes on the listserv that juvenile “records would certainly have affected the court being able to hold defendants pending trial. It would absolutely make a difference in any possible plea bargains. And sentences. It would get cold-blooded criminals off our streets.”

On the listserv, she voiced her disagreement with Ta-Nehisi Coates:

Oh, please. Ta-Nehisi Coates fixates on mass incarceration for which he blames the system but ignores the community members who simply walked away from responsibility for the children they sired or family members they could have influenced.

As I’ve been saying since the 2000s, the Democrats have their work cut out for them. Maintaining a Coalition of the Fringes isn’t easy, especially when the most colorful and entitled-feeling element in the coalition are African-Americans. The Democrats have benefited from positioning the Republicans as the White Party while stirring up anti-white animus. But the Democrats’ danger is becoming the Black Party. If you are an Asian, say, and you have to choose who to cast your lot with, the White Party or the Black Party, is your choice really that difficult?

The Democrats have benefited from the decline of the crime problem. But it’s recent explosion precisely in places where Democrats are pandering hardest to blacks — e.g., St. Louis, Baltimore, and Capitol Hill — indicates the problems Democrats will face in future decades keeping their black constituents from driving out their nonblack sympathizers.