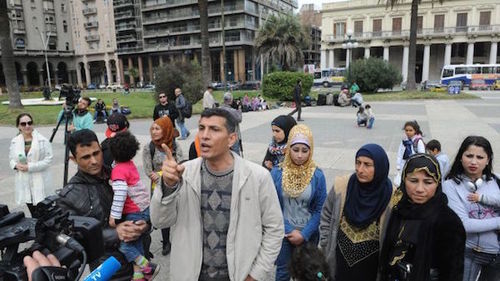 Uruguay: Syrian Refugees Complain the Hospitality Is Not Adequate

How many Syrian refugees are too many? For tiny Uruguay (population 3.3 million), that number would be 42.

The five Syrian families welcomed into the Uruguay community last year have managed to turn off the entire country with their rude, demanding behavior. (Syrians have similarly made the impression in Europe that they are hard-to-satisfy grifters looking for a handout.)

Particularly troublesome has been Merhi Alshebli, a man with one wife and 15 children. He complained that he couldn’t afford to feed his assorted progeny and doused himself with gasoline during a meeting with a government official. Apparently Alshebli thought the gasoline stunt would express his desire to leave Uruguay for a country with more free stuff. Maybe gasoline dousing is a Syrian thing.

Is Chancellor Angela Merkel paying attention to what’s happening with refugees in Uruguay? Germany is forecast to get 1.5 million refugees and illegal aliens this year alone as a result of Merkel’s open borders policy.

Many Uruguayans Fed Up with Complaints from Syrian Refugees, Associated Press, October 19, 2015

JUAN LACAZE, Uruguay (AP) — When Uruguay announced last year that it would be taking in five families fleeing Syria’s devastating civil war, residents of this small town pulled together and lobbied to host one.

Then in November, locals welcomed a newly arrived Merhi Alshebli, his wife and their 15 children with food and seeds to plant vegetables. People in Juan Lacaze, a coastal city of fishermen and paper factory workers in southwestern Uruguay, wanted to do their part to help a country where more than 200,000 have been killed in the fighting.

But after months of the Syrians’ complaints about their living conditions and demands to be sent to another country, many Uruguayans in this town and elsewhere have come to see the refugees more as rude, ungrateful guests. This month the 51-year-old Alshebli shocked locals by dousing himself in gasoline in protest, furthering Uruguayans’ indignation and sense that this South American nation’s humanitarian gesture has gone off the rails.

“I’m outraged,” said Monica Benitez, who works at a shoe store in Juan Lacaze’s tiny downtown. “What they are doing is offensive.”

The Syrians’ discontent is playing out as hundreds of thousands of their compatriots are risking their lives to migrate to Europe and world leaders from German Chancellor Angela Merkel to Pope Francis have urged nations to open their doors to the flood. The administration of U.S. President Barack Obama has pledged to take in 10,000 Syrians over the next year.

Uruguay’s attempt to help by sheltering 42 refugees – a largely symbolic gesture given that over 4 million Syrians have fled since civil war broke out in 2011 – appears to be backfiring, just as earlier this year the ups and downs of six former Guantanamo Bay detainees taken in by the country hogged headlines. Like the ex-detainees, the refugee families complain that life in Uruguay is expensive and authorities aren’t doing enough to support them. But unlike the former prisoners, who refused jobs offered to them, the adult Syrians have worked.

The Syrians’ biggest beef is that they can’t make ends meet even though the government provides housing and gives each family a monthly stipend. Both government officials and the families have declined to say how much that is.

“I like Uruguay. I like Uruguayan families. My young children all go to school here,” Alshebli said in halting Spanish, standing in the living room of his sparsely furnished, multi-room home on the outskirts of Juan Lacaze. “But food is very expensive. How can I feed 15 children?”

He showed The Associated Press a two-month winter electricity bill totaling $475 and said everyone in the family who is able works. For example his 19-year-old daughter Nada sells Arab food downtown and recently worked in an assisted living facility, but earned just $68 in a little under a month there.

Alshebli also complained that the government won’t let him farm beyond the modest vegetable garden the family has planted.

“No sheep. No cows. No land,” said Alshebli, recounting what he said officials told him.

Political analyst Daniel Chasquetti said the government underestimated cultural differences between Uruguay and the refugees’ homeland and failed to take into account their limited job skills.

“And it’s not like Uruguay is a country bursting with opportunities,” Chasquetti said.

The economy of this nation of 3.3 million people is largely based on agricultural and textile exports, and about 40 percent of workers earn around $500 a month, according to a leading union.

In August one of the Syrian families tried to travel to Serbia, only to be detained 23 days at the airport in Istanbul because they didn’t have the right documents. Ultimately they returned to Uruguay.

The refugees do not have Syrian passports and cannot get Uruguayan ones because they are not citizens. The government has given them national ID cards, but they’re insufficient to cross many of the world’s frontiers and Uruguay says it can’t force other countries to accept the documents.

Their frustration at a boiling point, the Syrians protested for several days last month in front of the Uruguayan presidency to demand help getting to another country.

Then came the incident at Alshebli’s home on Oct. 6, when he poured gasoline over himself in protest in the presence of officials from Uruguay’s Human Rights Secretariat. According to a statement from the agency, he did so after being told that Uruguay doesn’t have the authority to issue him a visa for another country.y

It’s unclear whether Alshebli intended to light himself on fire or simply scare the officials, who later filed a police complaint. Alshebli declined to discuss the incident, and the head of the rights body did not respond to requests for comment.

One of Alshebli’s sons, 21-year-old Ibrahim, said his father simply lost his temper and didn’t mean any harm. The elder Alshebli was briefly detained and taken to a hospital for psychiatric evaluation.

Self-immolation has special symbolism today in the Middle East. A major catalyst for the Arab Spring, which began in 2011 in Tunisia, was a poor and frustrated fruit vendor who set himself on fire.

But many Uruguayans were appalled.

Lourdes Schneck, who serves the Uruguayan specialty of fried pies in downtown, said she wasn’t sure whether to be angry with her government or the Syrians.

“I get the feeling they thought they were coming to a different class of country, with more wealth,” said Schneck, who periodically hires one of Alshebli’s teenage sons, 15-year-old Mohammed.

Jennyfer Lopez, a student in Juan Lacaze, thinks they never should have been taken in.

“Uruguay isn’t in a financial position to be receiving refugees,” she said, echoing a common criticism. “It was obvious they wouldn’t be comfortable here.”

Former President Jose Mujica, who left office in March, was the driving force behind inviting the Syrians and the ex-Guantanamo prisoners. Mujica, who was jailed for 13 years during the country’s dictatorship, took pride in opening Uruguay’s doors to people in need.

His successor, Tabare Vazquez, has shown much less enthusiasm. In his inaugural speech, Vazquez said a “profound analysis” was necessary before Uruguay accommodated more Syrian refugees.

A second group of 72 refugees was supposed to come in February but never did. Foreign Minister Rodolfo Nin Novoa has insisted they’ll arrive later this year.