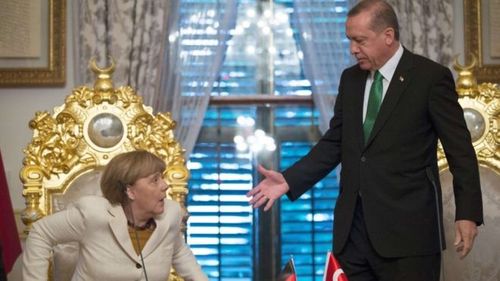 In politics you can sometimes gauge the level of panic and fear by the speed with which previously held principles are set aside.

So with the migrant crisis.

Some open borders have been suspended, governments are contemplating talking to Syria’s President Bashar al-Assad, long denounced as a brutal dictator, and a deal is being hastily concluded with Turkey, widely held to be an increasingly authoritarian country. …

Angela Merkel has called her decision to open Germany’s borders to refugees a “historic challenge” – but she is no longer in charge of events.

Her increasingly restive party is muttering she is “without a plan”.

So the overture to Turkey – it is born out of the failure of other policies.

Germany had put great store by burden-sharing, by getting other countries to accept quotas.

It was muscled through a meeting of EU interior ministers against the wishes of several countries.

But only a handful of refugees have been relocated. Many others are refusing to leave Germany. …

So Turkey came to be seen as the key to managing the crisis. …

Even though Turkey is only a couple of weeks away from a sensitive election, Angela Merkel has hurried to Ankara to meet the president and prime minister. …

The Turks are in no hurry to conclude a deal.

They understand events have handed them powerful cards. …

It wants a lifting of visa restrictions inside the open borders of the Schengen area.

It wants to see its application to join the EU “fast-tracked”.

The EU has indicated that it is prepared to support opening Chapter 17 of the accession process which deals with economic and monetary affairs.

Turkey was accepted as a formal candidate to join the EU in 1999.

It was a slow process. Not all of Europe’s leaders wanted Turkey in the union.

Former French President Nicholas Sarkozy said: “The EU is primarily for the European continent. To my knowledge, our Turkish friends – a great power, a great nation – are mainly in Asia Minor.”

Only recently the German chancellor said: “I still have hesitations over Turkey’s full membership.”

The hesitations were not just about the impact of having such a large country join the union.

There were increasing concerns about the authoritarian leadership of Erdogan, the leader of the AKP, an Islamist party.

The media is not free. Journalists are frequently under pressure of arrest. Some reporters have been jailed.

Papers and TV networks have been restricted in reporting the investigation into the recent Ankara bombings.

The courts are not always impartial and the rights of the Kurdish minority are under threat.

Many members of the European Parliament believe their concerns about basic human rights have not been addressed and are now being set aside.

The fact that Angela Merkel was prepared to shake the hand of the Turkish president in the midst of a controversial election campaign is a sign of Europe’s desperation. …

His opponents accuse him of using a bomb attack to launch raids against the Kurds and so widen political divisions. …

The publication of the EU’s annual progress report on Turkey’s EU membership, which almost certainly contains criticism of the Turkish leadership, has now suddenly been delayed – probably until after the Turkish election.

Compromises unimaginable just weeks ago are now being embraced.

Actually, it shouldn’t have taken all that much imagination to foresee the consequences back in late August.