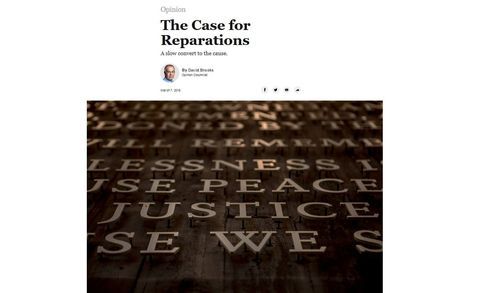 The Bonfire of the Sanities: David Brooks Goes For Reparations

The Case for Reparations
A slow convert to the cause.

… Nearly five years ago I read Ta-Nehisi Coates’s Atlantic article “The Case for Reparations,” with mild disagreement. All sorts of practical objections leapt to mind. What about the recent African immigrants? What about the poor whites who have nothing of what you would call privilege? Do we pay Oprah and LeBron?

But I have had so many experiences over the past year — sitting, for example, with an elderly black woman in South Carolina shaking in rage because the kids in her neighborhood face greater challenges than she did growing up in 1953 — that suggest we are at another moment of make-or-break racial reckoning.

Coates’s essay seems right now, especially this part: “And so we must imagine a new country. Reparations — by which I mean the full acceptance of our collective biography and its consequences — is the price we must pay to see ourselves squarely. … What I’m talking about is more than recompense for past injustices — more than a handout, a payoff, hush money, or a reluctant bribe. What I’m talking about is a national reckoning that would lead to spiritual renewal.”

We’re a nation coming apart at the seams, a nation in which each tribe has its own narrative and the narratives are generally resentment narratives. The African-American experience is somehow at the core of this fragmentation — the original sin that hardens the heart, separates Americans from one another and serves as model and fuel for other injustices.

The need now is to consolidate all the different narratives and make them reconciliation and possibility narratives, in which all feel known. That requires direct action, a concrete gesture of respect that makes possible the beginning of a new chapter in our common life. Reparations are a drastic policy and hard to execute, but the very act of talking about and designing them heals a wound and opens a new story.

Obviously, in Brooks’ conception, reparations aren’t intended to work in any real world sense. The point of Brooks “concrete gesture of respect” is to make a futile and stupid gesture of some kind of religious symbolism by setting fire to a giant pile of money.

But being concrete-minded myself and always oriented toward examples rather than abstractions, I’m fascinated by the practical questions of who gets how much. Which of the following people should get 100% share of Reparations and which should get a smaller share, and what percentage should each get: