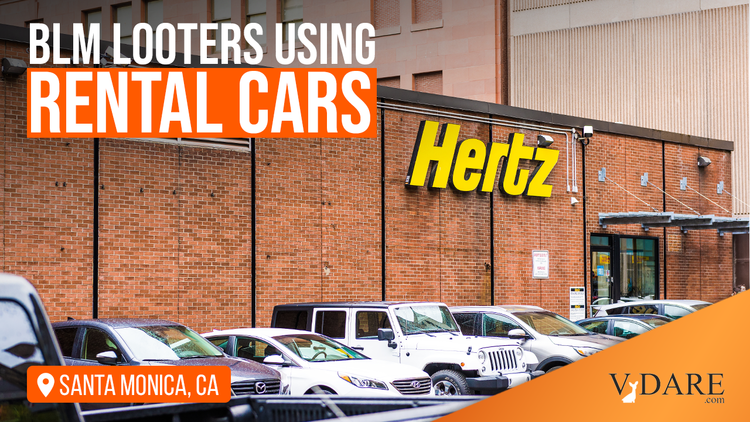 In 2020, the Peaceful Protesters have made a big leap upward in looting techniques. Instead of just ransacking the Korean-run liquor stores in their own neighborhood as during the 1992 Rodney King riot, looters have targeted rich people’s shopping districts such as Fifth Avenue in NYC and Santa Monica, CA.

From the Santa Monica Lookout, here’s one of the first news articles I’ve read on the new techniques employed by looters and how the cops are (finally) responding.

Only it was a Tuesday, and the City was still in the midst of a coronavirus emergency that had crippled its once thriving business center.

“At 7 p.m., we started seeing carloads of people coming off the freeway,” said Cobarrubias, who was formerly in charge of Traffic Enforcement.

The cars streaming into the city, Corbarrubias knew, weren’t shoppers and diners but well organized bands of looters who planned to strike Downtown after they had swept through the area during rioting May 31.

Police had been tipped off by a community member who on Tuesday afternoon had seen a one-line “story” posted on Instagram, Cobarrubias said.

The previous night hundreds of protesters had taken to the streets of South Los Angeles after Sheriff’s deputies fatally shot a Black bicyclist during a traffic stop.

Three months after rows of Downtown area businesses were ransacked, looters were coming back.

This time, Cobarrubias said, police were ready. They had tracked those who posted the Instagram “story” and found that one of them had more than 3,000 followers.

“We called everybody in,” Cobarrubias said. “Let’s just basically saturate the Downtown area.” …

At around 6 p.m. the Police Department deployed its drone to monitor incoming traffic.

An hour later — as called for in the Instagram post — caravans of rental cars began exiting the freeway and traveling in rows of three to five towards the Downtown.

Officers began pulling over drivers who who violated the traffic code, Cobarrubias said.

“As soon as we started doing traffic stops the others would leave,” she said. “As soon as they saw the officers, they veered off.

… The pattern of the looting was similar to that in other city’s like Chicago, she said.

“They meet outside the targeted area and drive in,” she said. “It’s the same pattern.”

While many of the rental cars used in Santa Monica had out-of-state plates, those inside were mostly young residents of the Los Angeles area, with a few from Northern California, Cobarrubias said.

The police response Tuesday night “shows the collaboration between the police and the community,” Cobarrubiias said. “If we have to turn every stone over, that’s what we have to do.