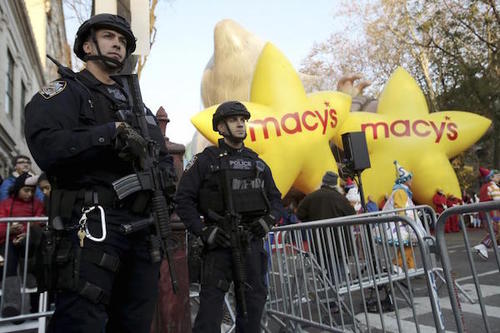 Before Thanksgiving 2015 fades from view, we should use it to take a mental snapshot of how America has been transformed by unwise immigration. One of the holiday’s great traditions is the Macy’s Thanksgiving Day parade in New York City that is filled with bands, floats and huge balloons shaped like cartoon characters. Once an enjoyable celebration of the beginning of the Christmas season, now the parade must be guarded by 2500 police to protect spectators from Muslim jihadists who want to murder as many Americans as possible.

Since New York City is a big target for jihad slaughter, it needs serious security for every major event. One example is the New York Marathon, which got a lot more policing following the Boston Marathon bombing by the Muslim asylee Tsarnaev brothers. The extra security for New York’s 2013 race reportedly cost $1 million. (I couldn’t find security costs for Thursday’s parade, so they must have been high. Hostile diversity is expensive.)

Like marathons, parades attract big crowds of spectators which are a magnet for Muslim mass murderers. 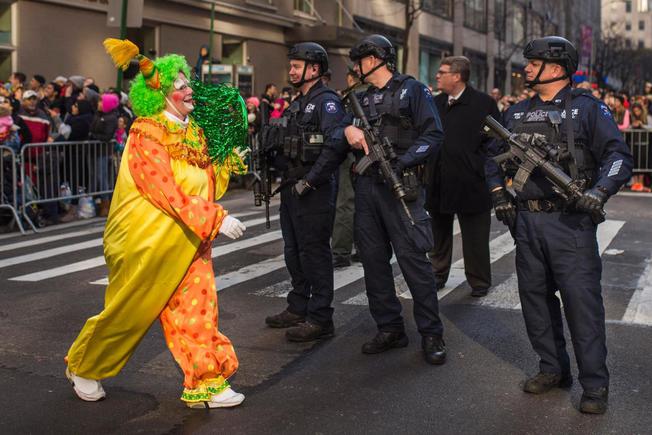 The New York Times noted the security presence on its Friday front page. 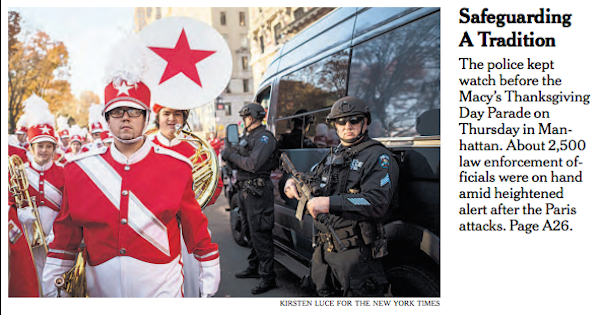 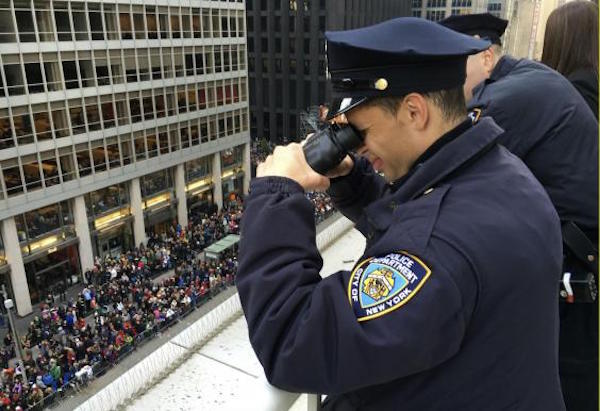 A British newspaper explained the event and its background for readers across the pond:

Thanksgiving: What is the Macy’s Day Parade?, Independent, November 26, 2015

New York saw unprecedented security as millions of people turned out on Thursday to celebrate the Macy’s Thanksgiving Day Parade.

President Barack Obama had the day before said the US faced no specific or credible terror threat, and urged Americans to celebrate the Thanksgiving Day holiday.

Yet, amid an atmosphere of anxiety since the Paris attacks and Isis threats to target iconic locations such as Times Square, New York City Mayor Bill de Blasio said 2,500 officers would be on duty at the parade. Officials estimate up to three million spectators are lining the streets.

“I think people are coming here from all over the city, all over the metropolitan region, all over the country to be a part of this parade,” Mr  de Blasio said during a news conference on Wednesday night.

“We cannot let the terrorists succeed at psychological warfare. They’re doing what they do to try and create fear, to try and change us.”

The parade dates from 1924 and has always been associated with the celebrated department store, which has its landmark location on the city’s 34th Street.

Tradition has it, that many of the stores first employees were new immigrants from Europe and proud of their heritage and the festivals they had enjoyed in Europe. In New York, the employees marched to store dressed in vibrant costumes – a tradition that has remained ever since.

This, the 89th parade, is featuring as many as 8,000 participants, among them Mariah Carey, Dove Cameron and Sofia Carson.

On Wednesday night, thousands gathered to watch the inflation of the dozens of the huge balloons – of characters such as Snoopy and SpongeBob  – that have become a mainstay of the event as the march heads south through the city.

“I feel very safe,” one onlooker told CBS. “It’s very reassuring. It’s nice to see the NYPD out in full force, and makes you feel like you’re protected.”

The NYPD is keeping tight security, using some high-tech tools. The NYPD’s newly formed Critical Response Team is helping to watch over the event.

In addition to the extra uniformed and plainclothes cops, K-9 units, bomb-sniffing dogs and mobile cameras are being utilised.

“Particularly for these events, let us celebrate this great time of the year. Let’s celebrate with our families. Let’s have a joyous time together.”