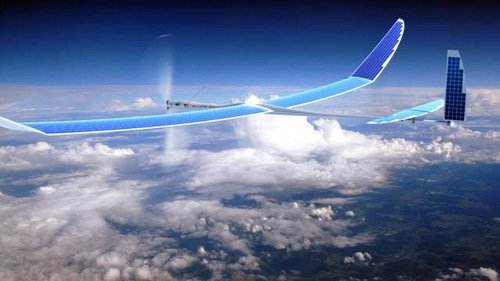 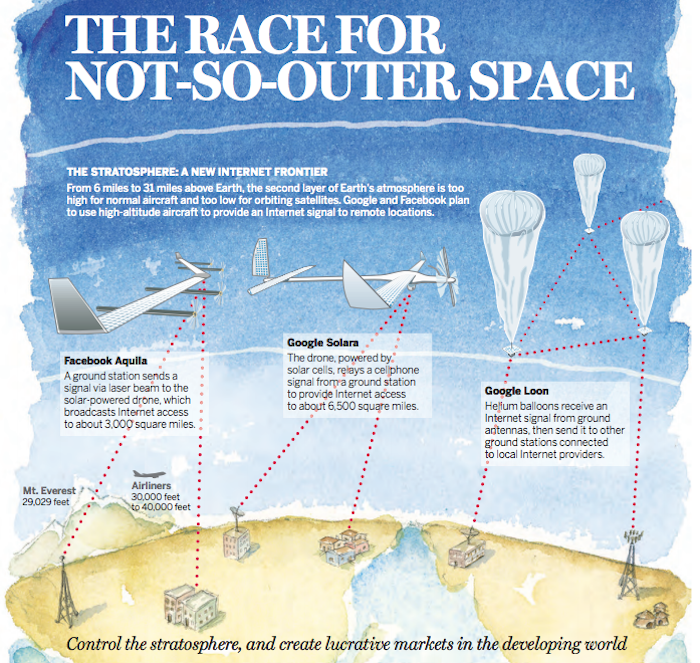 One of the movers and shakers of the internetization of the planet is Facebook founder Mark Zuckerberg, an open-borders billionaire who says he wants to share. 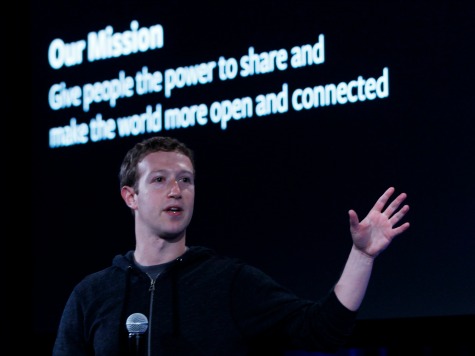 Zuck’s project is a drone with a 140-foot wingspan that would beam the internet to third world areas for six months at a time, shown below. 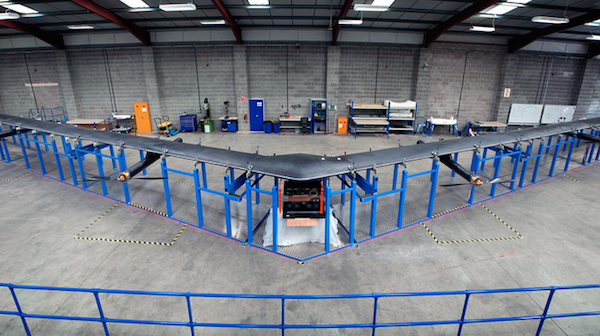 While the internet provides educational opportunities, like the Kahn Academy, the web has also had the effect of advertising first-world lifestyles that look very appealing to young males in backward places. The message seems to be that comparative riches can be had just by going to Europe or America. As a result, young fellows, some from prosperous Senegal for example, pay smugglers to get them to Europe despite great risk because they are mesmerized by the dream of wealth. The young men are needed in their homelands to continue building their economies, but that isn’t exciting enough for many. (See my blog Africans Inundate Europe for “a Better Life” Despite Increasing Prosperity at Home.)

Nevertheless, the tech titans are excited about creating a brave new interconnected world, which they incidentally believe will be profitable for them.

MOUNTAIN VIEW — Its visionary founder is in prison. Its most heralded invention crash-landed in the New Mexico desert this spring.

Titan Aerospace, bought by Google last year, is experiencing some turbulence on its way to the stratosphere.

In its quest to build a solar-powered drone that can beam the Internet down to Earth from 12 miles above, Titan is racing to beat a sleek rival, Facebook’s boomerang-shaped Aquila plane, which is complete and awaiting testing over the United States.

Tech giants Google and Facebook are dabbling in experimental aviation for the same reason they have invested in undersea cables and communications satellites: They hope to connect a larger portion of the world’s people to the wonders — and advertising — of the Internet. But of all the risky “moonshot” experiments Silicon Valley is throwing money at this year, few seem as odd and starry-eyed as the race to dominate the cold, lonely reaches between the highest commercial jets and disintegrating meteors.

“There’s not a whole lot up there,” said Brian Wynne, president of the Association for Unmanned Vehicle Systems International. “It’s really cold, so the operational environment is pretty harsh. The idea is you can get — particularly using solar — real endurance out there and fly for months on end.”

Alphabet, Google’s newly formed parent company, has dual plans for the atmosphere near 65,000 feet, more than twice the height of the world’s tallest mountain. One is Project Loon, which resembles a weather balloon but operates as an airborne Wi-Fi provider and will launch as a trial next year over Sri Lanka, Indonesia and possibly India.

The other is a fleet of Titan’s lightweight aircraft blanketed with solar panels on its carbon-fiber frame.

The esoteric world of the HALE — high-altitude, long-endurance, unmanned aircraft — has so few players outside the military that Google and Facebook bought the two most ambitious startups in a bidding war last year.

Only time, and gravity, will determine which company wins the battle to connect the world’s most remote and unconnected regions with Internet from the skies. But judging by their public pronouncements, aerospace engineer Ray Morgan is unimpressed.

Morgan should know. He was one of the pioneers of so-called “atmosats,” or atmospheric satellites, working for Simi Valley-based AeroVironment and in partnership with NASA to build solar-powered unmanned aircraft such as Helios, a prototype that flew for 40 minutes at nearly 100,000 feet above sea level in 2001.

Transforming such a flight into a commercially viable communications platform is a herculean task.

“The problem is very, very difficult,” said Morgan, who has worked in the field since 1980. “It’s more difficult than it seems when you first start testing it.”

An atmosat needs to be strong enough to climb through the troposphere, where weather happens, but light enough to cruise in the thinner air of the stratosphere. Aquila, no heavier than a car, will be lifted by balloon before setting free at 70,000 feet, soaring higher in the day and lower at night, and using lasers and radio technology to connect to other drones and the ground.

The biggest challenges are battery life and the efficiency of the solar array, Morgan said. The planes are also hard to operate outside the tropics, where their solar cells benefit from sustained sunlight near the equator.

That might be good enough for Facebook and Google, both of which have been eyeing tropical regions as they fight to expand their market and find new Internet users in South Asia, Africa and Latin America. As they compete to build the better aircraft, the two Silicon Valley giants are also collaborating to make sure they have enough space, and radiofrequency spectrum, to beam Internet service down from above the clouds.

Their intended audience was the World Radiocommunication Conference that met this month in Switzerland, where the tech companies are up against the fixed satellite industry in pushing to smooth the rules to allow their solar planes to operate with little hindrance.

“Over 30 percent of the world lives beyond the range of mobile broadband. In rural areas, in which approximately half the world lives, that number is over 70 percent,” Whitt and Maguire wrote. “Recent improvements in composite materials, low-power computing, battery technology and solar panels have made (platforms such as Titan and Aquila) a new way to spur the growth of rural wireless networks.”

But the details and viability of these projects remain shrouded in secrecy as the two companies seek to perfect their designs. Facebook’s Aquila prototype, built in southwestern England and unveiled in a video announcement in July, appears overly heavy but could work for a few months at a time over the tropics if it has a lightweight energy-storage system and highly efficient solar cells, Morgan said.

Titan, however, has aircraft designs and boasts of carrying a heavy payload that “seem irrational,” Morgan said. Its Solara 50 prototype crashed shortly after takeoff in May. The National Transportation Safety Board is investigating the crash and expects to release a report next year. An airworthiness certificate granted to Titan by the Federal Aviation Administration expired last month and hasn’t been renewed.

Google has several more models, including two registered with the FAA this fall, and said in a statement that it remains “optimistic about the potential of high-altitude, solar-powered planes.”

Facebook nearly bought Titan last year but instead scooped up British firm Ascenta, creator of the Aquila drone, for $20 million. Its leader, Andy Cox, is a defense industry veteran who helped create the Zephyr drone that stayed aloft for 14 days — a world record.

Titan’s founder, Maximus Yaney, was more of an unknown when Google bought his firm around the same time for an undisclosed amount.

After establishing his drone startup in Manhattan, Yaney recruited young engineers from around the country, many of whom had worked on solar car competitions in college. Yaney favored bright young minds over experienced industry veterans who might have been intimidated by the hurdles, said former Titan intern Frank Sebastianelli, one of the company’s first 10 employees.

“He’s just got an eclectic mind,” Sebastianelli said. “He liked to push the limits.”

Yaney, now in a federal prison in New York, did not respond to a letter and requests through his lawyer for comment. Federal prosecutors indicted him on real-estate fraud charges less than a month after Google bought his company. Sources close to the deal say neither Google nor Titan’s upper ranks knew about the legal problems or FBI investigation involving another of his companies, formerly known as Titan Student Communities, which owned rental properties in college towns. Yaney hid from lenders that he owned the Titan real estate company and another company that both bought and sold an Illinois apartment building, and also created fake leases and rent rolls and staged empty units to appear occupied, prosecutors said.

He pleaded guilty to mortgage fraud in May, paid $7.75 million in restitution and is scheduled to be released next fall.

Leaders of the search giant’s Google X research lab helped with “due diligence” before acquiring Titan’s engineering team and its technology, said Astro Teller, X’s top executive, who describes himself as “Captain of Moonshots.” Asked for further comment, he declined.

Google closed down Titan’s New Mexico office this year, moved its engineers to the Bay Area and last week paid back nearly $1 million to New Mexico to cover incentives that helped draw Titan there from New York. But the team continues hiring, with one recent posting seeking a test pilot who can operate a craft remotely.

With no information revealed about its plane in more than a year, Morgan said it is possible that Titan is further along than what public records show. If they achieve their mission, either Titan or Aquila could provide a great service to people the Internet has not yet reached.

Once able to fly, “the operational costs are trivial,” Morgan said. “The problem is being able to do it so the investment costs don’t break the bank.”

Those costs were too much for NASA to sustain. But for cash-rich Google and Facebook, Morgan acknowledged, anything is possible.

“Money solves a lot of problems in aircraft design and maintenance,” he said.