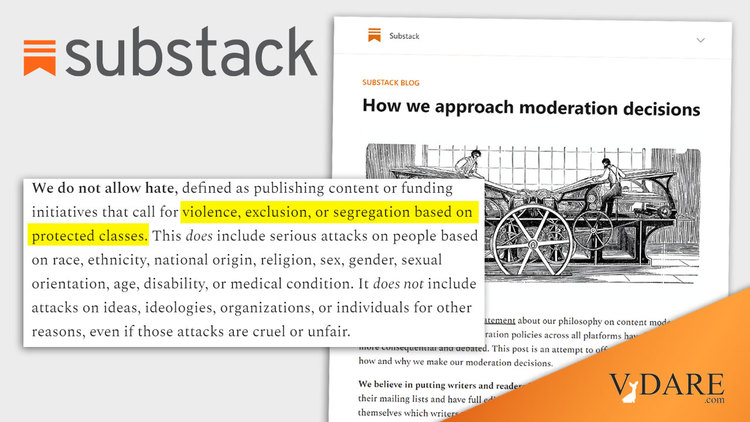 Substack Says NO To Discussions of "Exclusion, Or Segregation"

Earlier, by Steve Sailer: Glenn Greenwald Is Making a $Million/Year Off Substack Newsletter

Substack, the latest buzz in information delivery, holds some promise for  improvement of the awful state of American journalism.  Independent writers can solicit subscriptions (one year of Matt Taibbi, for instance, is $50) and, if popular enough, support themselves.

But already, it's announcing that the "independent" writers it hosts won't truly be independent.

We do not allow hate, defined as publishing content or funding initiatives that call for violence, exclusion, or segregation based on protected classes. This does include serious attacks on people based on race, ethnicity, national origin, religion, sex, gender, sexual orientation, age, disability, or medical condition. It does not include attacks on ideas, ideologies, organizations, or individuals for other reasons, even if those attacks are cruel or unfair.  [How we approach moderation decisions, SubstackBlog, March 25, 2021]

Of course, we can trust that "exclusion, or segregation" is not going to cover woke varieties, like Columbia University holding 19 different graduation ceremonies, including separate ones for the 8 genders.

No, you can be sure they mean WHITE varieties of exclusion or segregation.  "Protected classes", whatever that means, probably means what you think it means. Yet the time for a robust, honest and good-faith discussion of racial separation is upon us like Aragorn's open war.

In other words, policies that would steer us away from mind-warping censorship-doxxing-thought control, weekly mass shootings, urban riots, capitol trespassing, corporate crushing of common sense, politicians openly declaring their hostility to whites, border rushes that leave the landscape littered with dead, kangaroo trials whose outcomes are directed by threatened chaos, brainwashing of the military, and the general inability of large swaths of the population from speaking the obvious out loud. You know, what America's become.