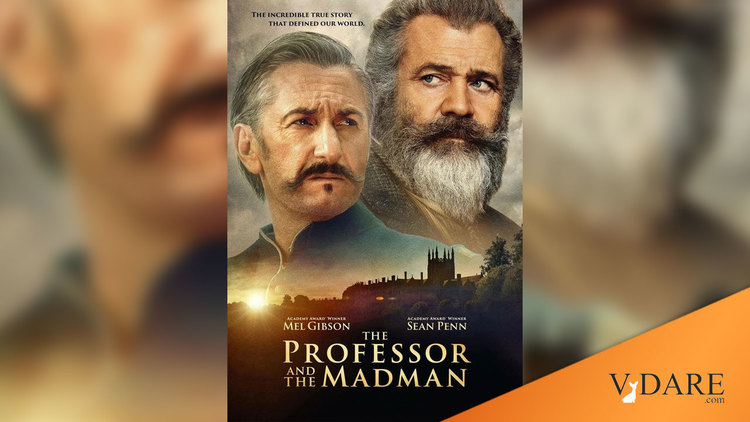 "The Professor and the Madman"

“But of course this won’t continue to last forever. Our imaginations won’t be filled by white characters and actors and images anymore.”

And yet, almost all of the best movies of 2019 were about white men, starting with Once Upon a Time in Hollywood, with Parasite being about white-adjacent Koreans.

For example, I recently saw on Netflix The Professor and the Madman about the crowd-sourced creation of the Oxford English Dictionary with Sean Penn and Mel Gibson (but which plays which? It could definitely go either way). This labor of love from Gibson was finally dumped in theaters for a week in 2019 after a long feud between Gibson and the money men. Although the third act is botched by the producers refusing to come up with the $35 million Gibson’s team needed to finish the movie in proper style, and Penn’s madman can’t compete with Joaquin Phoenix’s madman in Joker, it’s still quite good.

It’s not quite in the top tier with Tarantino’s masterpiece, nor in the second tier with Ford v. Ferrari, Joker, Parasite, The Irishman, and 1917, but it solidly falls in the third tier of good 2019 movies with Richard Jewell and Midway.

The most memorable scene is when the professor and the madman finally meet after years of collaborating by mail on the creation of the OED. It was the Victorian Age, so both professors and madmen wore enormous beards. The two stars, both titans of 1980s movies, have never appeared together before. So when Gibson and Penn finally meet in the movie, they have this amazing encounter that chimpanzees would identify with in which they stroke each other’s beards with delighted recognition: what a long strange trip it’s been.