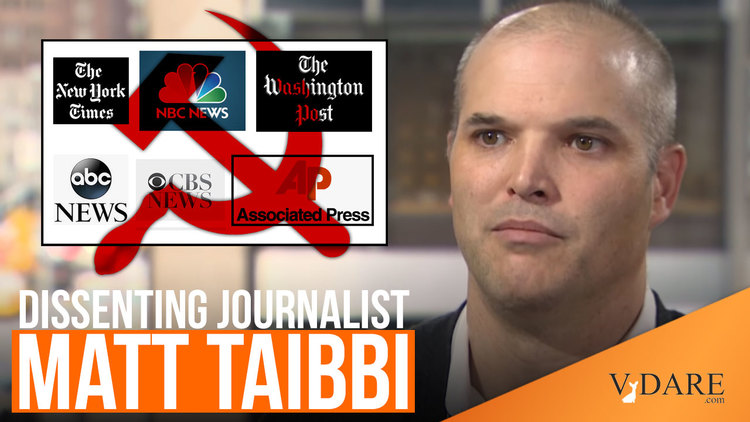 Matt Taibbi, Censored Out Of MSM Despite Ducking On Immigration, Strikes Back

Congratulations, Anonymous Attorney, for beating me to the punch in discussing Matt Taibbi’s Substack posting The Sovietization of the American Press March 12 2021.

In the seemingly endless parade of in-house investigations of journalists, paper after paper has borrowed from the Soviet style of printing judgments and self-denunciations, without explaining the actual crimes.

Taibbi’s essay is well worth reading in full. He makes a reasoned case that the fawningly adulatory coverage of President Biden’s activities resembles the style of the old Soviet Media (about which he knows a great deal). And he has identified a crucial shift in the American MSM:

Instead of appearing as props in a phony rendering of objectivity, Republicans in basically all non-Fox media have been moved off the legitimacy spectrum, and appear as foils only. Allowable opinion is now depicted stretching all the way from one brand of “moderate” Democrat to another…. reporters once had to at least pretend to be something other than courtiers, as it was considered unseemly to openly gush about a party or a politician.

Matt Taibbi of course achieved immortality with his devastating 2010 description of Goldman Sachs:

The world’s most powerful investment bank is a great vampire squid wrapped around the face of humanity, relentlessly jamming its blood funnel into anything that smells like money.

Taibbi first entered the VDARE.com worldview the following year. As I relate in Matt Taibbi Dissents On Immigration: Gets Repressed in his February 7, 2011 Mailbag blog at Rolling Stone, he responded a letter he received which said:

Hi Matt, At heart, I'm a progressive and hold many "liberal" views on global warming, gun control, etc. I think the greatest problem we face is the control that the super elite hold over the country...

Now here's the thing. I am strongly against illegal immigration, which puts me at odds with most on the left.

I also live in a town that has a massive immigrant population and a decimated school system…intellectually I think bilingual education is a mistake... I know doctors here in New York who see an endless stream of 15- and 16 year-old girls flying in from places like the Dominican Republic specifically to get on Medicare and have their babies here. I'm pretty sure it's okay to not be happy about that as a taxpayer.

If I'm wrong about that, please write in and let me know.

Someone did let him know. In his March 7, 2011 Mailbag he announced he would no longer discuss immigration.

No matter how much discretion he employed, this extraordinarily talented writer has now had to go out on his own via Substack. This is an appalling comment on the American MSM.