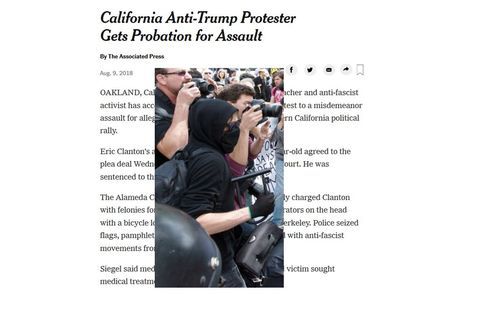 The story of Eric Clanton, the anti-free speech demonstrator / adjunct philosophy instructor who put on an Antifa mask and slammed seven pro-Trump individuals on the head with his bike lock in Berkeley last year (luckily, nobody died), is pretty interesting. Especially the part about how the “weaponized autism” of 4chan /pol/ participants crowdsourced the job law enforcement couldn’t or wouldn’t do — identifying the masked malefactor from subtle clues.

But, the tale contradicted The Narrative about how pro-Trump violence is sweeping the nation, so the New York Times never ever mentioned Clanton’s name. Until yesterday, when it ran the following Associated Press story. I reproduce the NYT’s account in full:

California Anti-Trump Protester Gets Probation for Assault
By The Associated Press
Aug. 9, 2018

OAKLAND, Calif. — A former community college teacher and anti-fascist activist has accepted a plea deal and pleaded no contest to a misdemeanor assault for allegedly attacking attendees of a Northern California political rally.

The Alameda County district attorney’s office initially charged Clanton with felonies for hitting several pro-Trump demonstrators on the head with a bicycle lock during a 2017 demonstration in Berkeley. Police seized flags, pamphlets and other paraphernalia associated with anti-fascist movements from his apartment.

Not, “Antifa,” but “anti-fascist movements.” You know, like the movement that Orwell served in during the Spanish Civil War.

Siegel said medical records showed only one alleged victim sought medical treatment, for a bruise smaller than a dime.

“Smaller than a dime,” so kwitcher bellyaching, fascists!

The NYT would like to apologize to its readers for this brief but annoying interruption and now back to its wall to wall coverage of the first anniversary of Charlottesville.

Two days after news of Clanton getting off with no jail time (other than the time it took him to arrange bail last year) and there doesn’t seem to be an followup reporting. Did Clanton agree to snitch? Or is this normal sentencing in Current Year California? Will AG Sessions start an inquiry that could lead to federal civil rights charges against the anti-First Amendment thug? What exactly are the laws in California about smashing people on the head while masked and why aren’t they terribly applicable in this situation?

This country needs rule of law, and part of rule of law is the press holding the justice system’s feet to the fire until obvious questions get answered.