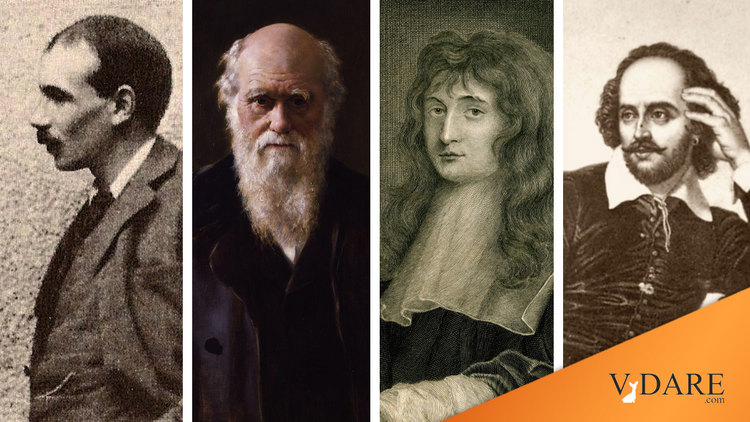 The Woke are canceling ever more of the great minds of English history, such as Ronald A. Fisher:

Fisher was the Newton of the life sciences, the man who invented the math needed to solve big problems. Richard Dawkins indignantly tweets:

Ignominious cowardice by Gonville & Caius College. RA Fisher was triply distinguished: one of the three founders of population genetics, arguably the most distinguished Darwinian since Darwin, and beyond argument the founder of modern statistics.

In what order will other great minds of England be canceled? Here’s my countdown from soonest to last:

4. John Maynard Keynes: one of the reasons Fisher is being canceled is because he was the founding chairman of the undergraduate wing of the Cambridge Eugenics Society. Keynes was the founding treasurer of the Cambridge Eugenics Society, and remained an advocate of eugenics up through the year of his death in 1946. On the other hand, perhaps Keynes is too central to major left-of-center parties to be brought down. For example, Paul Krugman constantly lauds Keynes in the New York Times while never ever mentioning Keynes’ eugenics activism.

3. Charles Darwin: The author of On the Origin of Species by Means of Natural Selection, or the Preservation of Favoured Races in the Struggle for Life inspired his half-cousin Francis Galton to dream up his eugenics project. On the other hand, Darwin had been promoted to secular sainthood in the war on Christianity. But Dawkins’ style rationalism is over the hill in the Age of the Intersectional.

2. Isaac Newton: As Master of the Mint, Newton prosecuted 28 counterfeiters and made sure that master counterfeiter William Chaloner was hanged. George Floyd was arrested for passing a counterfeit $20. Ergo, Newton is Derek Chauvin.

I am so old that I can remember when other people's achievements were considered to be an inspiration, rather than a grievance.