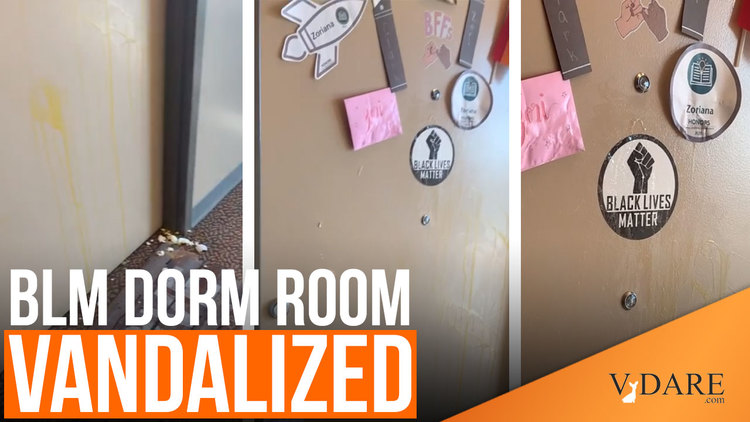 From the Detroit Free Press:

For an emotional support dog, Clark Kent Martinez sure seems to need a lot of support.

as she marches in a protest organized after she had her dorm door vandalized in February. Jeremiah Wheeler, at right, a senior at Wayne State and the president of the Wayne State University Black Student Union, leads the protest march on campus on Mar. 10, 2021.

Zoriana Martinez, a first-year transfer student from Oberlin College in Ohio, is now living in an off-campus apartment in Midtown, just over a week after the most recent of what she calls racially motivated attacks.

If you can’t trust an Oberlin student’s report of hate crimes, who can you trust?

On three occasions, Martinez returned to her dorm in Leon Atchison Hall to find her door covered in eggs, her Black Lives Matter and Gay Pride stickers ripped off and her welcome mat reading “All you need is love” stolen.

… During the first incident, Martinez found eggs had been thrown at her dorm door Feb. 16. She said whoever threw the eggs was aiming at her Black Lives Matter sticker, leading her to believe the attack was racially motivated. She contacted BSU President Jeremiah Wheeler and the residence hall community director, who said a resident adviser would be alerted.

Less than two weeks later, on March 1, Martinez again returned to her dorm to find egg yolk running down her door and egg shells collecting on the floor. Housing staff told her that no report had been filed for the first incident — a result of miscommunication, they told her.

While Martinez said the university’s response was not proactive and did not make her feel safe staying on campus, university officials insist she was offered solutions along the way. and campus police say the matter is being investigated thoroughly. However, the university was not able to confirm to the Free Press whether a report was filed following the first incident.

… After the first two incidents, university staff cleaned Martinez’s door, contacted campus police on her behalf to pursue an investigation, and offered her a spot in one of the university’s seven safe rooms created for students in crisis — which she declined, according to Dunham.

It was after the third incident on March 2, when her welcome mat and photo of her emotional support dog, Clark Kent Martinez, were stolen, that Martinez realized the two may be in actual danger and began to actively look for emergency housing options.

“I can’t focus on my academics when all of these other things are going on so now I’m thinking this is gonna affect my GPA,” said Martinez, a pre-law criminal justice student. “This is gonna affect me long term and potentially getting into law school.” This reminds me of when I was interviewed in 1979 for a front page article in the Houston Chronicle that was nominally about how, as the captain of Rice U.’s champion College Bowl team, I must be really smart. But the reporter managed to undermine that purported theme by comically reporting what I said verbatim without cleaning up my sloppy diction, which usually doesn’t sound real smart. I was a little annoyed initially, but then decided that was a fair and funny dig at the know-it-all college boy. (Here’s rare archival footage of me in 1979.)

Martinez was issued a full refund for her campus housing for the winter semester from the university.

Martinez’s story is just one example of the university’s lack of support for its Black students, BSU President Jeremiah Wheeler said.

“We, as Black students, bring the culture to Wayne State, we are the culture,” Wheeler said. “They claim being in the heart of Detroit, Black people are Detroit. It’s an 86% Black city, it’s the blackest city in the country yet at Wayne State we are marginalized on campus.”

Wayne State University is a majority-minority university, a point of pride for the university that boasts having the most-diverse student body in Michigan. Despite this, Wheeler said Black students don’t feel supported by the institution with a lackluster African American Studies department and abysmal funding for student organizations.

Forgive me, but does Wayne State have any non-lackluster departments? It’s ranked in a tie for the #249th best National University in the US News ratings.

During the rally, student LaNyah Patwin, 19, spoke of what she called a similar attack in November against her and her roommates, all of whom are queer. The trio’s Black Lives Matter and Gay Pride stickers were ripped off of their dorm door. Patwin has since moved off campus.

Detroit Will Breathe co-founder Nakia Wallace attended Wednesday’s rally, where she took to the microphone to remind marchers that their efforts are part of a generations-long fight for equal access to resources.

“The most segregated part of this city is the campus of Wayne State University.”

Nakia, you should have a talk with Raj Chetty. He think Detroit is racially segregated because it’s so heavily black, but you are saying the part of Detroit that is most racially like the United States, Wayne State, is the most segregated and the rest of Detroit is not segregated (i.e., not white).

Police are continuing to interview all students living in Atchison Hall and review security camera footage. Atchison Hall has cameras only in the building’s entryway, allowing investigators to see when residents enter and leave.

At the rally, Martinez had a messenger for her still-unidentified attacker: “Thank you for underestimating me and my voice for thinking you can get away with this. Thank you for reminding me that there is still so much work to be done at Michigan’s most diverse university and the blackest city in America.”