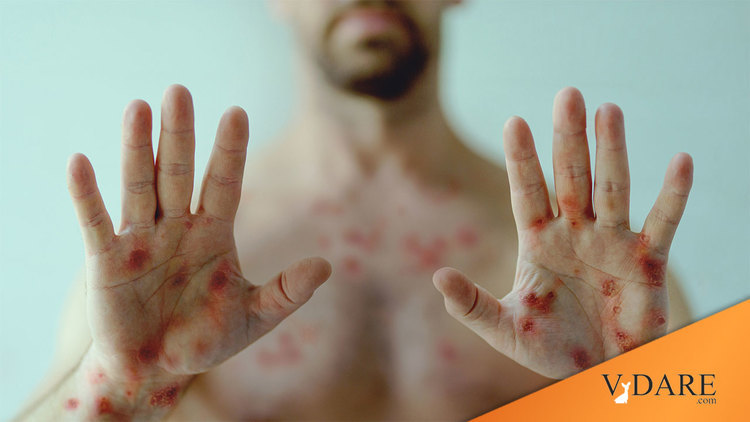 Steven Thrasher In The GUARDIAN: "Many People—Even Many Queer People—Have Internalized The Idea That Contracting Sexually Transmitted Infections Is Bad"

Earlier: Gay, Black, HIV-Positive, And Lied About It: A Hero for Our Times

‘Is sex worth the risk?’ Monkeypox just the latest virus to threaten gay intimacy

It’s as if there might be some kind of a pattern.

‘Many people – even many queer people – have internalized the idea that contracting STIs is bad, shameful, and should be hidden.’

Decades after the Aids pandemic began, game-changing drugs restored some peace of mind. Now monkeypox puts that progress at risk

Steven W Thrasher, PhD, a former Guardian writer-at-large, is the author of The Viral Underclass: The Human Toll When Inequality and Disease Collide and a professor at Northwestern University

Last week, I went to my doctor’s office for a long-scheduled sexually transmitted infection checkup, and started to cry a few minutes into my appointment.

Like many gay men, I am on a daily drug called pre-exposure prophylaxis, or PrEP, which prevents me from becoming infected by HIV, even if I were to have sex without a condom or use injection drugs. At 44 years old, I am of the generation who knew about Aids before we even knew about sex; from childhood, I conflated sexuality and fear. PrEP was a gamechanger in taking that fear away.

But last week, HIV was not much on my mind, and almost as soon as the physician’s assistant closed the door, I burst into tears.

… I was terrified that some skin bumps could be monkeypox.

Because he was so nice, I blabbered on that I would never tell anyone else to feel bad if they contracted any infection. But my book was coming out the following week, and it was about viruses, and what if I had to cancel my launch because I had contracted a virus?

… He also kindly, but very firmly, told me not to feel bad about feeling bad.

… And I realized how angry I was that, for the third time in my life, a viral pandemic was dictating my sex life, shaping my professional life, messing with my head, and keeping me from experiencing intimacy.

I am, of course, not alone in this. HIV, Sars-CoV-2 and now hMPXV – the virus responsible for monkeypox in humans – have all upended people’s lives, but their effects have not been felt equally. In all three cases, LGBTQ+ people were disproportionately affected.

This is the result of a few related factors, all of them closely linked to societal stigma. One is that LGBTQ+ people are, on average, more likely to be poor than straight people and thus more likely to be subjected to the confluence of conditions (incarceration, unemployment, a lack of insurance) that produce a viral underclass. Second, queer people do not get a good sexual health education, nor access to queer-specific health resources. And third, gay men have, on average, more sexual partners than straight people. Even when coupled, gay men are more likely to be openly non-monogamous.

This is nothing to be ashamed of; being trans or gay is good, and queer sex is good. But many people – even many queer people – have internalized the idea that contracting (or even talking about) STIs is bad, shameful and should be hidden.

… For the same reasons, the emerging monkeypox epidemic should be talked about as an STI, particularly in light of new research from the current London outbreak and scandalously overlooked research into the 2017 outbreak in Nigeria that suggests monkeypox may have mutated to allow for transmission through genital secretion. This does not mean that hMPXV can only be transmitted sexually, but it acknowledges that gay sex is a major way such pathogens move.

Shame should not be a factor in these discussions. “Viruses are not conscious,” said Pedro Serrano, a public health researcher. “They simply follow the mechanistic drive to replicate.”

Viruses may not be conscious, but those who choose to punish us for contracting them certainly are.

… After the Stonewall Riots of 1969, there was a brief window of time when queer men could have a lot of sex with relatively little worry.

But then, in the early 1980s, reports trickled in that young gay men were becoming marked by purple lesions and falling ill to an extremely rare form of cancer that usually only affected older men near the Mediterranean Sea. The era of Aids was upon us.

… The [monkeypox] outbreak is threatening all the progress that was made toward freeing gay men to have sex without fear.

… Shame is heaped upon gay men … When a virus like monkeypox moves in a way that can out us, the answer is not to shrink, or to hide, or to be embarrassed about the kind of sex we have.

Rather, these times demand that we refuse to be relegated to a viral underclass – and compel us to destroy the conditions that created such an underclass in the first place.

…Being a queer person myself, when Mason wears nail polish to openly challenge the concepts of masculinity around him, I was totally cheering for him. But I was annoyed, in retrospect, to find myself so emotionally invested in the success of an average white boy as he headed off towards his manhood by the end of the film.

The gay critic is peeved that the movie got his hopes up about the dreamy adolescent boy, only to bring them down with a crash when the kid gets a girlfriend.

A Hero for Our Times

Mr. Johnson’s legal troubles began in 2013, when he was arrested after a white man he had had consensual sex with told the police he believed that Mr. Johnson had given him the virus.

It’s like if Emmett Till were gay and his accuser followed the letter of the law.

Five other men, three of them white, would later testify that Mr. Johnson had not only failed to disclose his H.I.V. status before engaging in consensual sex, but had willfully lied about it.

Four out of the six accusers were white.