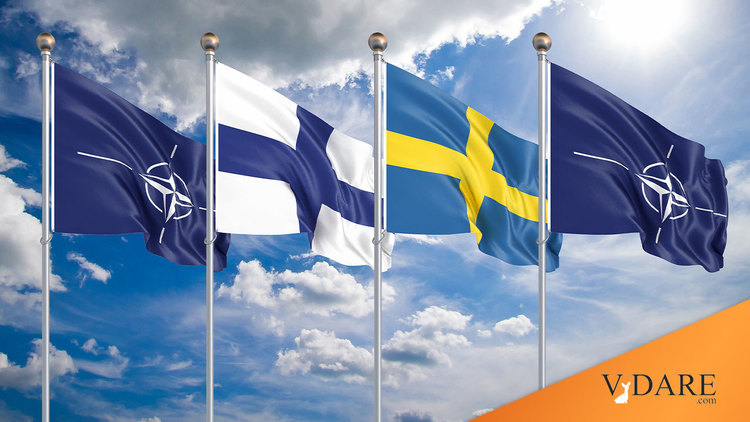 Earlier by Patrick J. Buchanan: Why Would U.S. Give A War Guarantee—To Finland?

Master strategist Vladimir Putin is well on his way to de-Finlandizing…Finland. From the New York Times news section:

The Senate on Wednesday voted overwhelmingly to approve a treaty that would expand NATO to include Finland and Sweden, with Republicans and Democrats linking arms for one of the most significant expansions of the alliance in decades in the face of Russia’s continued assault on Ukraine.

The ambassadors of Finland and Sweden were on hand in the Senate gallery to watch as senators voted 95-1. Only Senator Josh Hawley, Republican of Missouri, voted no. Senator Rand Paul, Republican of Kentucky, voted present.

The tally far surpassed the two-thirds of the Senate necessary to approve the treaty, underscoring the bipartisan appetite for a more muscular military alliance, even amid threats from President Vladimir V. Putin of Russia that Sweden and Finland would face unspecified retaliation should they join NATO.

All 30 current members of the alliance must ratify the accession of the two countries. Twenty-two countries have already done so.

Republican support for the treaty was particularly striking, given former President Donald J. Trump’s vocal contempt for NATO. Some G.O.P. lawmakers who aligned themselves with him have adopted Mr. Trump’s “America first” philosophy of eschewing alliances and the concept of shared responsibility for maintaining the global order.

But the Senate minority leader, Mitch McConnell, Republican of Kentucky, has made it a mission of late to push back against the anti-interventionist strain in his party.

… Sen. Tom Cotton (R-Ark.), meanwhile, pointed out that it would be “strange indeed” for senators who voted for North Macedonia’s 2019 accession into NATO — a group that includes Hawley — to suddenly oppose Finland and Sweden’s candidacy.

“Let’s be honest, who can deny the much stronger cases for Finland and Sweden?” Cotton said, arguing that those countries were “far larger, far more capable and far more strategically situated.”

Strategic isn’t always good. The Finnish border is about as far from St. Petersburg, Russia’s number two city, as Los Angeles, America’s number two city, is from the Mexican border. The U.S. would not appreciate Mexico joining an alliance led by Moscow.

The Finnish border used to be closer but the Soviet Union invaded Finland in 1939 to push it back. The Finns initially embarrassed Moscow, but the Red Army reorganized and ground out a modest victory in 1940.

NATO member Estonia is even closer to St. Petersburg, only about 100 miles.

Unlike in Ukraine, which is not a member of NATO and thus where the U.S. can fight a proxy war without American troops facing off against Russian troops, a Russian attack on Finland under Article 5—“Collective defence means that an attack against one Ally is considered as an attack against all Allies”—a Russian invasion of Finland (or Estonia) would trigger collective defense obligations.

Sen. Rand Paul (R-Ky.), the only other senator to have opposed the North Macedonia and Montenegro bids, voted “present” Wednesday, noting on the floor that in the wake of Russia’s Ukraine invasion, “I am less adamant about preventing NATO’s expansion with Sweden and Finland.”

The Senate rejected Paul’s efforts to attach an amendment to the ratification that would explicitly state the United States’ Article 5 obligations to defend member nations would not supersede Congress’s constitutional right to authorize the use of military force.

Menendez said the amendment was “unnecessary” to protect Congress’s constitutional role. He told his colleagues it was potentially “deeply damaging” and “self-defeating to do anything that casts doubt on our rock-solid commitment to NATO.”