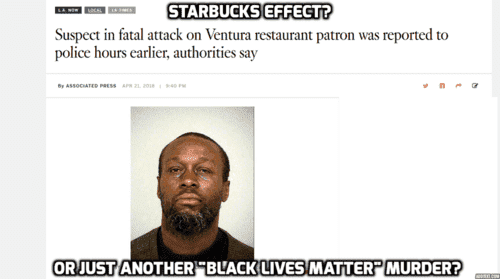 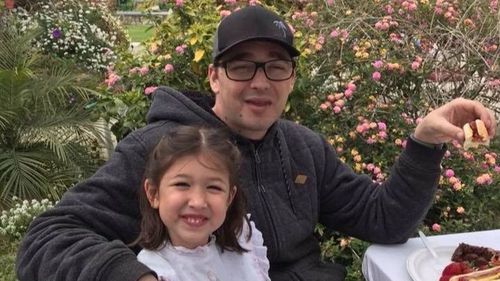 Jamal Jackson, above, is a homeless black madman who stabbed Anthony Mele (pictured right with his daughter) a white man who was eating in a nice restaurant, the kind of place you normally don't meet black homeless men. You know, like Starbucks used to be. The Ventura police, alerted to the presence of a black madman "yelling and being disruptive" had pointed a camera at him briefly, but then decided to let him rave.

The mother of a Ventura man who was randomly stabbed to death while dining at a beachside restaurant with his daughter on his lap was still grappling this weekend with the loss of a man she described as "a good husband and a loving father."

Anthony Mele Jr., 35, was having dinner with his wife, Hana, and their 5-year-old daughter, Willow, at the Aloha Steakhouse on the city's promenade Wednesday night when a homeless man walked up and stabbed Mele in the neck, police said.

Mele was transported to a local hospital, where he later died, authorities said.

The suspect "came in and straight up stabbed him," Rebecca Mele, 57, the victim's mother, said in an interview with The Times on Sunday. "It was so quick, my son turned and was stabbed while he's holding his daughter."

Jamal Jackson, 49, a homeless man with a criminal history, was chased by bystanders and arrested a short time later, authorities said.

Police received a call about 6:25 p.m. Wednesday from a bystander who reported that a man, who was later identified as Jackson, was yelling and being disruptive on the promenade, according to a statement from the Ventura Police Department. Police said they used a pier security camera to monitor the man's actions for more than 20 minutes before he walked out of the camera's view.

"During that time, Command Center staff determined Jackson did not appear to be disturbing or threatening and cancelled the call for service," the police department said in its statement. Police received multiple 911 calls about Mele's stabbing at the restaurant shortly after 9 p.m.

Rebecca Mele said her family is upset the police didn't do more.

Fatal stabbing at a Ventura eatery elicits anger at the police response and the city's handling of its homeless problem, By Ruben Vives, LA Times, April 22, 2018

So is this what I thought of immediately, the "Starbucks Effect", in which the staff of a nice restaurant feels unable to try and show a black homeless man the door before he kills someone? Or is it an effect of the Black Lives Matter movement making police afraid to police blacks who haven't killed anyone yet?

And what about the motive? Jamal Jackson was angry about something, and then he stabbed a "random" white man—was he motivated by the same kind of hate (with colors reversed) as was shown by Dylann Roof?
These are all questions that the press isn't interested in answering—the picture of Mr. Mele (deceased) was in the story I linked to, the picture of Jackson (arrested) was in the AP story I screenshotted above, and neither of them say "A black man stabbed a white man to death".