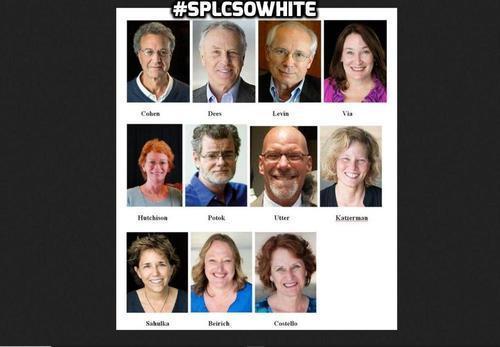 White Privilege at the $PLC

One place where White Privilege definitely exists is at the upper pay ranges at the Southern Poverty Law Center in Alabama, which enjoyed a bonanza fiscal year, adding over $120 million to its vast endowment.

One of the weirder aspects of the SPLC has long been its adamant refusal to hire blacks and pay them a lot of money. The SPLC’s new tax form lists its 11 highest paid employees for the year ending 10/31/17, and sure enough they are still all white:

Apparently, the SPLC has always believed that diversity and inclusion is for racists like you, not for saints like them. Back in March 2016, Watching the Watchdogs noted this oddity:

Spring is in the air, which means it’s time to have a look at the Southern Poverty Law Center’s latest financial reports.

While there have been some significant events surrounding the company’s bloated Endowment Fund, (to be examined in a future post), and the usual deck chair shuffling on the “Hate Map” fundraising tool, (also to be explored shortly), Watching the Watchdogs has determined that, once again, the Senior Executive Staff of the SPLC is all white, just as it has been every single year since the company opened for business in 1971.

Not a lot of other multi-million dollar companies can claim an unbroken 45-year streak of whites at the heights.

Mark Potok, looking like a melancholy George Lucas, is now out after a long run at the SPLC, by the way.