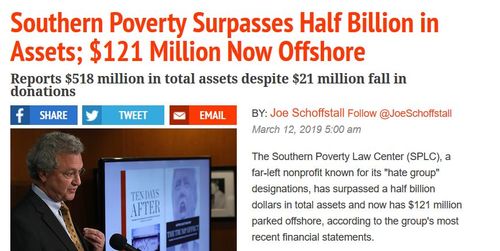 SPLC's Wealth Now Up Near a Half Billion Bucks

Not much poverty, Southern or otherwise, at the Southern Poverty Law Center.

The lucrative SPLC had another solid gold year, although down slightly from the bonanza that was 2017. From the Washington Free Beacon:

The Southern Poverty Law Center (SPLC), a far-left nonprofit known for its “hate group” designations, has surpassed a half billion dollars in total assets and now has $121 million parked offshore, according to the group’s most recent financial statements.

The SPLC, which is based in Montgomery, Ala., has not publicly posted its most recent financial statements on its website. However, the organization applied for renewal in the state of California days ago and submitted a number of documents pertaining to its financial standing including its most recent audited statement and tax forms for calendar year 2018, which covers Nov. 1, 2017 to Oct. 31, 2018.

According to the filings submitted to California’s Office of Attorney General, the group reported total assets of $518 million from November 2017 to the Oct. 31, 2018, an increase of $41 million from the $477 million in total assets it reported on its previous year’s tax forms.

Wouldn’t net assets (now $492 million) be the most relevant number?

The SPLC’s assets increased despite its total revenue falling by $15 million last year.

The SPLC’s fiscal year starts on November 1st, so its 2017 year began a week before Trump won. That was the fiscal year it rained solid gold on the SPLC.