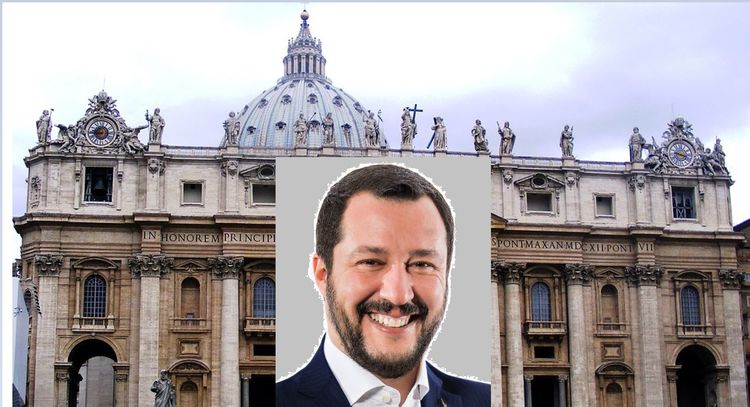 Needless to say, Pope Francis is not a defender of the West. His stewardship of the Church has been, shall we say, questionable. "Is the pope Catholic?" is no longer a rhetorical question and I'm far from the first person to recognize that. [Is the Pope Catholic? by Robert Royal, Claremont Review of Books, February 21, 2019]

Catholic Charities is a remarkably cynical scam wherein our tax dollars pay "nonprofit" heads outrageous salaries to import dependents. American Catholic churches openly lobby for more illegal immigration. The pope bashed Donald Trump during the 2016 campaign. The same pattern can be seen worldwide. In Europe, it almost looks like the Church is advocating for the Islamization of the Continent. If he wanted to destroy Christianity (at least its Roman Catholic variant) in its Continental birthplace, what, we may ask, would Pope Francis be doing differently?

And yet, despite it all, Catholicism has an important relationship to the very identity of many Western nations. Polish nationalism is almost inconceivable without Catholicism. In Italy, there's a more complicated historical relationship, but nationalists refuse to abandon the Church, even though the Church's hierarchy has seemingly abandoned Italy.

The Pope has refused to meet with Matteo Salvini, even comparing him to an abortion provider. Yet today, it's Matteo Salvini who is championing Catholicism before a high-stakes confrontation over the creation of a new Italian government.

It wasn't just his "irresponsible", "reckless" and "alarming" behaviour as a politician that earned Matteo Salvini the ire of Giuseppe Conte in his resignation speech Tuesday.

The Italian prime minister also lashed out at Salvini's habit of brandishing a rosary at political rallies and in parliament, arguing that it "undermined the principle of secularism of the modern state".

Salvini responded by kissing his rosary.

He later made reference to Conte's accusation in his own speech. He uttered a prayer, asking for the protection of "the Holy Mary" for Italy. His League partners, Simone Pillon and Lorenzo Fontana, waved their own rosaries.

The Italian media is reportedly speculating that Pope Francis is trying to block Salvini from taking power.

The theory being floated in the Italian press is that Francis has charged Vatican Secretary of State Cdl. Pietro Parolin with encouraging rival parties to challenge Salvini by uniting to form a new coalition government.

Italian media are also suggesting that Parolin, working through the Vatican diplomatic corps, is cobbling together a deal with Germany and France to increase funding to Italy to help manage the hundreds of thousands of migrants that have streamed into the country in recent years. Reportedly, the deal is conditional on Salvini not taking power in the next elections.

However, does Pope Francis have a real following among Italy's churchgoing Catholics? A gloomy report from the corporate media last year suggested that Italy's faithful are more receptive of Salvini's nationalism than the pope's Open Borders with a touch of incense.

If Italian Catholics were following Francis’ example, one would expect them to shy away from Salvini. Instead, they, like the rest of country, are flocking in his direction.

Among Catholics who attend mass at least once a week — about a third of Italians — support for Salvini has doubled, from 15.7 percent in March to 31.8 percent in July, according to a poll by Ipsos.

Meanwhile, the pontiff's popularity in Italy has dropped from 88 percent in 2013, when he was elected, to 71 percent, according to a recent poll. Among the key reasons, according to the poll’s author, Ilvo Diamanti, is migration.

“The atmosphere has worsened, and Catholics are not immune from it,” said Oliviero Forti, head of migration policy at Caritas Italia, the umbrella organization for Catholic aid agencies. “For many of these Catholics, the Holy Father is not perceived anymore as a spiritual guide. On the contrary, in some cases he's accused of being far from the real problems people are facing.”

In June, after Salvini refused to allow a ship carrying migrants to dock in an Italian port, Francis tweeted out a message of solidarity with its passengers. The response was a flood of attacks, asking “Why you don’t take them to the Vatican?” and accusing the Catholic Charity Caritas of making money off of migrants in the country.

As you would expect, Salvini is denying any conflict with the Holy Father. “My duty is to make decisions, sometimes painful and difficult, but necessary to establish rules that benefit everyone," Salvini said recently. [Italy's anti-immigrant populist leader denies conflict with Pope, by John L. Allen Jr., Crux, August 12, 2019]

He's walking a delicate line. However, if he wins this high-stakes political game, he won't just be the leader of Italy. He will be the champion of Europe's pro-nationalist Catholics.