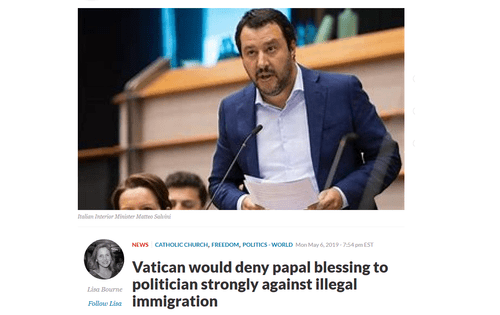 Pope Francis Won't Meet with Matteo Salvini, But Check Out What (American) Cardinal Burke Has to Say About Muslim Migration!

Would Pope Francis bestow a papal blessing on Italian Interior Minister Matteo Salvini (known to his supporters as Il Capitano, "the Captain")? An aide to the Pope has answered in the negative. From LifeSite News:

The Vatican would deny a papal blessing to Italian Interior Minister Matteo Salvini because of his strong policies on illegal immigration, a close aide to Pope Francis said, putting the Catholic government official on the par with an abortion provider and Venezuelan dictators. Cardinal Konrad Krajewski said papal blessings can be requested for religious events such as First Communions, Confirmations, weddings, and anniversaries, Breitbart’s Thomas Williams reported, but cannot be given to someone if it would create scandal.

“But we do not give these to everyone,” Krajewski told the Italian daily Il Messaggero. “Could we ever give one, just as an example, to a hospital where abortions take place? Or can we give one to certain characters in Venezuela who are asking us for one? No, certainly not.”

“As another example,” Krajewski said, “if Salvini asked us for one, we would deny it.”

And why is that?

The Vatican would refuse Salvini a request for a papal blessing because of Salvini’s tough policies to curtail illegal immigration, according to the Il Messaggero report, at a time when the Vatican is pushing for more welcome for migrants.

Il Messaggero had also reported that another cardinal told Salvini several months ago that he would “never receive a papal audience” unless he did change the policy of closed ports, Williams’ report said.

Two Italian publications, Il Giorno and Il Mio Giornale, reported in late March that Francis had repeatedly refused Salvini’s efforts to schedule a private audience with him, and also that Salvini had been informed the pope’s refusal to meet with him was because of Salvini’s immigration stance. The pope was not opposed in principle to a conversation with Salvini, the two outlets’ reports said, but the minister had been told “that a meeting could not occur if Salvini continues in his tough position regarding migrants.”

The article goes on to report that Pope Francis has no problem publicly hobnobbing with open pro-abortionists and LGBT activists, but Matteo Salvini is a bridge too far.

A later LifeSite News article reports that Cardinal Raymond Burke was asked about this in Rome. The American cardinal had an interesting response.

Burke had been asked, presumably apropos of Pope Francis’ refusal to grant an audience to Italy’s deputy prime minister Matteo Salvini, if a politician who resists large-scale Muslim immigration should be refused a papal blessing. The Cardinal indicated that he wouldn’t comment on papal blessings, but that he thought the “fundamental question” was regarding the morality of resisting Islamic mass migration. “I think the fundamental question here is: is someone who resists large-scale Muslim immigration committing an immoral act, and therefore should be, let’s say, denied Holy Communion or in some way recognized as a public sinner,” he said.

So how would the Cardinal respond to that question?

Resisting “large-scale Muslim immigration” is “a responsible exercise of one’s patriotism," Cardinal Raymond Burke said today. The Cardinal made the remark at this afternoon’s Question and Answer session at the Rome Life Forum in Rome. The session immediately followed Burke’s address on filial piety and national patriotism.

Cardinal Burke said that Islam "by its definition believes itself to be destined to rule the world".

“You don’t have to be a rocket scientist to see what’s happened, for instance, in Europe, in countries like France and Germany and also here in Italy. And it’s also happening in the United States.” Burke cited a book called No Go Zones which, he said, “records places in the United States where, in fact, Muslim immigrants have set up their own legal order.”

“In other words, they resist the legitimate authority of the state,” he continued.

This suggests to the cardinal, then, that resisting mass immigration by Muslims into one’s country is a laudable act of patriotism. “So to be opposed to large-scale Muslim immigration is … a responsible exercise of one’s patriotism,” he said.

“Yes, [some] people are true refugees. We must receive them and help them in every way, but this is not the case when you have simply a large scale immigration.”

It's good to hear a Cardinal actually defending what was once known as Christendom. It's such a contrast with the irresponsible rhetoric of Pope Francis.