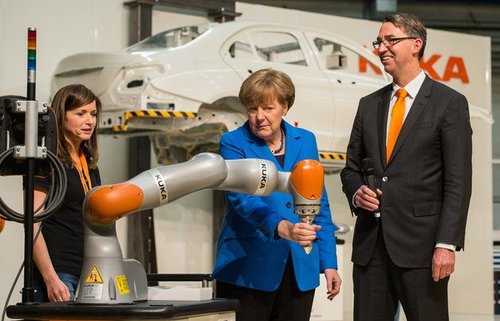 One reason cited for Germany’s excessive welcome of sketchy, potentially dangerous Syrians is the need for new workers to keep the factories humming. Der Spiegel reported, Rx for Prosperity: German Companies See Refugees as Opportunity, noting that the German population is “shrinking” and the nation faces a labor shortage.

Is it not odd that Germany doesn’t look closer to home for new workers — like Spain? That country has plenty of young people being strangled from unemployment. Some Spanish workers have in fact relocated to Germany for job opportunity, but why isn’t there more outreach?

It has been reported within the last week that the Syrian newbies are functionally illiterate and mostly worthless as job prospects.

Spaniards would also be a better choice because that have higher IQs on average: Spain – 98 versus Syria – 83.

Plus Spain is culturally Christian and has a European sensibility. Jihad is not a cultural value there. By comparison, a poll from the Arab Center for Research and Policy Studies found that 13 percent of Syrian refugees support ISIS.

In addition, Germany is transforming its factories to automation. It’s unclear that new workers need to be imported at all.

But if Germany must have new workers, why not make use of Spain and other European nations with large unemployment? Wasn’t ease of movement for workers advertised as an advantage of the borderless European Union?

Unemployment in Spain: a life without hope?, EuroNews, December 18, 2015

Jerez de la Frontera – where more than 1 in 3 is out of work Every day is a challenge for 27-year-old Miguel Angel Vaca Fernandez, as he strives to keep his head up and rise above his circumstances.

He is one of a huge number of unemployed young people in the city of Jerez de la Frontera, in the Andalusia region in southern Spain.

The overall jobless rate in this city is at a huge 40 percent.

Behind that dramatic statistic are the individuals, like Miguel Angel, who every day are facing the challenges created by longterm unemployment.

“I’ve been unemployed for three and a half years. It’s a truly hopeless situation, you start believing, ‘that’s all, that’s life’. You keep muddling through,” he says.

“There are days you don’t want to get out of bed. Then there are other days you get up with some small hope, but it’s just for nothing, it’s desperate.”

Miguel Angel is training for the police entrance exams. Competition so tough that this year 58,000 people applied for 1,300 available police jobs.

Concerns about a lost generation in Spain are something Miguel Angel knows about all too well. END_OF_DOCUMENT_TOKEN_TO_BE_REPLACED