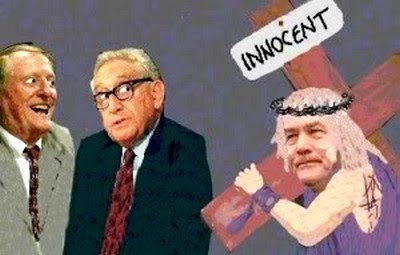 Conrad Black: Trump Stood By Me When Needed (Unlike Wm. F. Buckley)

Through the magic of Google’s News Alert it has been possible to keep a close eye on the media coverage of Donald Trump. I can confidently say that 85% of news stories are slanted negatively, with most of the rest displaying just professional detachment. With Op-Ed coverage, 99% are hostile, usually wildly so. Positive Op-Eds about Trump are in fact as rare as hen’s teeth.

Black observes that Trump has met

…increasingly hysterical responses…from the traditionally respectable political quarters that he discomforts. In this shrill political atmosphere, he is not the chief offender to civil standards of political discourse.

and attacks some Canadian writers (including the National Post editorialist) for recycling them.

is not my preferred candidate

he reviews quite thoroughly Trump’s proposals and concludes

This is not a radical program. He is fed up with those mealy-mouthed politicians and commentators who nibble around issues and show more concern for the sensibilities of Islam than the security of America, and who ignored every major issue that has arisen for decades — abortion, illegal immigration, wealth disparity, the corruption of campaign financing, and he is not wrong…He may not be the answer, but he is not a kook or a menace.

…we are friends, and I know him to be a generous, honourable and decent man, and a loyal friend (he volunteered to testify on my behalf in my trial in Chicago in 2007, when he certainly had other things to do. He distinguished himself in a difficult time for me far beyond many exalted “friends” and worthies in this country.)

Donald Trump — who, I should disclose, is an old friend, a fine and generous and loyal man, and a delightful companion...

And no wonder! As Peter Brimelow noted in William F. Buckley, Jr., RIP—Sort Of Black and his wife

…became an intimate of the Buckleys and I gather Bill was recently at the Palm Beach wake held before Black's imminent imprisonment for securities fraud. But Black was not the first to find that Buckley would not support him when it counted.

The link is to Kissinger, Buckley, and Me by Conrad Black The New York Sun December 17 2007 in which Black sadly recounted the contemptible behavior of these two "“friends” and worthies".

Perhaps many readers will be more impressed by Phyllis Schlafly’s ringing but reasoned endorsement of Trump today (Trump is 'last hope for America WND.com December 20 2015) but years ago I was taught in business credit decisions to take personal vignettes very seriously.

Conrad Black (email him) deserves America’s thanks for disclosing this valuable fact even though reopening painful memories.