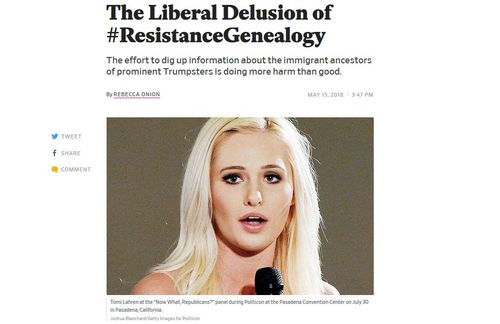 In Slate, Rebecca Onion writes The Liberal Delusion of #ResistanceGenealogy arguing that the idea that looking up someone’s ancestors online to say “You have immigrant ancestors, how can you impose any immigration restrictions at all now?”

In it, she argues that we patriotic immigration reformers are too evil to be reached by such arguments, and points out that these were all dismissed by VDARE.com editor Peter Brimelow in Alien Nation in 1995:

Besides giving people who rally against immigration too much benefit of the doubt, this comparative approach is ahistorical (purposefully so, since it’s making an argument for the connection between human experiences across time). This, like our reliance on the invocation of the Emma Lazarus poem on the Statue of Liberty, flattens everything out in a way that does nothing to enhance a pro-immigration argument for 2018.

We need to get past the idea that immigration hawks simply don’t know the immigration history of this country. In an influential 1992 article in the National Review, anti-immigration hard-liner and white (excuse me, “civic”) nationalist Peter Brimelow wrote that the restrictive decades between the enactment of restrictive quotas in the 1920s and the 1965 Immigration Act—a time he called “the Great Immigration Lull”—gave the country time to absorb and assimilate the immigrants who came in the early 20th century. (In one surreal passage, he writes, “the American nation was just swallowing, and then digesting … an unusually large and spicy immigrant meal.”)

That 1920s decision to install quotas based on racist pseudoscience, which historians on the left view as a damning episode in American immigration history, was, to Brimelow, a positive story: “[O]nce convinced that their nationhood was threatened by continued massive immigration, Americans changed the public policies that made it possible.” (Jeff Sessions is a fan too.) Brimelow’s 1995 book Alien Nation got positive coverage from the New York Times, Los Angeles Times, Newsweek, Atlantic Monthly, and so on. Brimelow, and those who think like him, know very well what the history of American immigration was like. They just draw different lessons from it than liberals do.

What about the idea that Americans who benefited from immigration in the past should not “pull up the ladder” after themselves—that they should, knowing their family’s history of struggle and success, give others the chance their ancestors were accorded? Liberals, animated by a sense of fairness, can’t believe that somebody descended from Italian peasants can live with the idea of excluding Syrian refugees today. But what looks like the most galling hypocrisy to liberals seems, to immigration hawks, like self-protective common sense. In one passage, Brimelow mocked the core of the very argument animating #ResistanceGenealogy: “How can X be against immigration when the nativists wanted to keep his own great-grandfather out?” This concept is illogical, Brimelow writes: “This, of course, is like arguing that a passenger already on board the lifeboat should refrain from pointing out that taking on more will cause it to capsize.” [Links in orginal]

All this is true, but of course, the idea that someone descended from an immigrant—or an immigrant himself, like Peter—shouldn’t be against immigration is wrong. To the extent that there are people, descended from legal immigrants, admitted on the promise to become loyal Americans who do feel that way, to that extent America has made mistakes in admitting these people in the past. See, for example, my blog post Tom Wolfe On Latin American Pride,  which quoted the late author as saying

More recently, I returned to Washington and Lee for a conference on the subject of Latin American writing in the United States. The conference soon became a general and much hotter discussion of the current immigration dispute. I had arrived believing that, for example, Mexicans who had gone to the trouble of coming to the United States legally, going through all the prescribed steps, would resent the fact that millions of Mexicans were now coming into the United States illegally across the desert border. I couldn't have been more mistaken. I discovered that everyone who thought of himself as Latin, even people who had been in this country for two and three generations, were wholeheartedly in favor of immediate amnesty and immediate citizenship for all Mexicans who happened now to be in the United States. And this feeling had nothing to do with immigration policy itself, nothing to do with law, nothing to do with politics, for that matter. To them, this was not a debate about immigration. The very existence of the debate itself was to them a besmirching of their fiction-absolute, of their conception of themselves as Latins. Somehow the debate, simply as a debate, cast an aspersion upon all Latins, implying doubt about their fitness to be within the border of such a superior nation.

The admission of those Mexicans turns out to have been a mistake, since even three generations later, they're not loyal Americans.