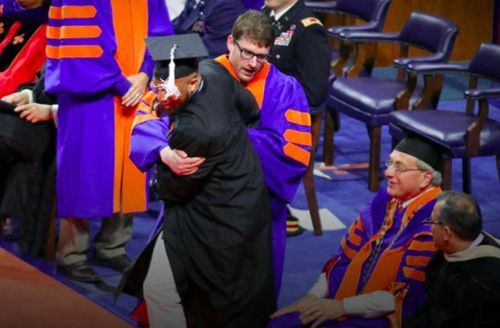 The reason: blacks refuse to follow the rules of college graduations, and treat any attempt to enforce them as the Return of Jim Crow.

This year at the University of Florida, the ceremony was slowed down when black students began dancing on stage after they got their diplomas. A school official physically forced them to move along so the ceremony could continue. Black students protested on social media and countless mainstream media outlets echoed their outrage. The school apologized, but critics are calling for an “inquiry.” The white staffer who moved the students along will be lucky if he keeps his job.

Of course, dancing on stage when you get your diploma is profoundly selfish because it holds up the ceremony for everyone else. This is why schools don’t like it. This is also why they usually ask parents to hold their applause until the end. As anyone who has attended a recent graduation ceremony can testify, blacks are likely to flout these cultural norms, and scream whenever their family member is named. University of Florida is not the first school where officials tried to maintain decorum only to be accused of “racism.”

For example, at Senatobia High School in Mississippi in 2015, three black family members of a graduating student were charged with disturbing the peace. Despite a request not to cheer until the end of the ceremony, they began screaming when their child was named. Superintendent Jay Foster, a white man who swore out the warrants, said he took action because for years, graduations had been like the Jerry Springer Show. “It was who can be the loudest—who can take the attention away from the kids the most.” He added that parents were complaining that the graduation ceremony was ruined for people who couldn’t even hear their child’s name announced because of the din.

Of course, the sight of a white school official in Mississippi invoking the law against the family of a black graduating student was too much for the media. The New York Times, Daily Mail, Huffington Post, and innumerable other outlets slammed Superintendent Foster.

The ACLU weighed in, calling it a violation of the First Amendment. Mr. Foster dropped the charges, but insisted he had done the right thing, saying he had received support from the community for a ceremony that had “dignity.” Linda Walker, the mother of one of those arrested, said she was still angry because “he done got my baby’s name all over the world.” “I’m not done with him,” she added, vowing legal action. (No news coverage suggests anything further happened, and Mr. Foster appears still to have his job.)

The problem is that all these people think they're Rosa Parks, defying unjust race-based laws on the part of some ethical principle. They seem to have no idea that the rules they're breaking are enforced against whites, too.