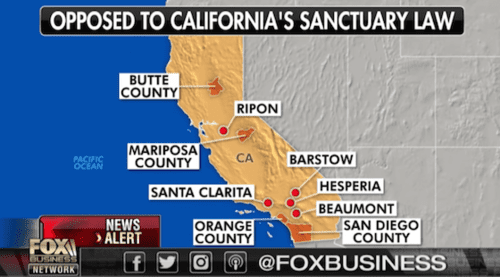 The California revolution against Sacramento’s hateful sanctuary policy for illegal aliens keeps building one community at a time. After years of nothing but bad news from California about law and borders, it’s rather cheering.

Here’s a current map of cities and counties that have voted against illegal alien sanctuary, as shown by Fox Business on May 15. 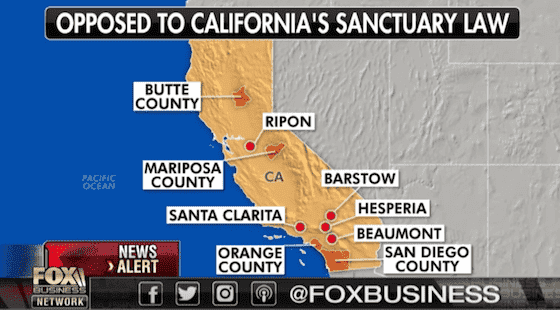 Jim Brulte, the Chairman of the California Republican Party, commented upon the progress during an interview with Stewart Varney on his business show Tuesday.

JIM BRULTE: The last time I checked, there were nine counties that now oppose the sanctuary state law and about 35 cities out of the 482 cities we have in California. The revolt started in southern California, with San Diego and Orange County and a lot of cities, Los Alamitos, but Mariposa County is up in the Central Valley. We are now seeing this up and down the state. There is a scientific principle that says for every action there’s an equal and opposite reaction, and the people and the people’s representatives and their cities are reacting to the Democrats who would rather protect people who are here illegally than citizens in their own cities.