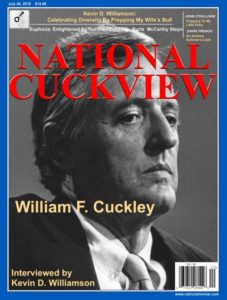 Most Cultural Marxist attacks on the Dissident Right consist just of 1) Point-And-Splutter about heresies, with no attempt at refutation; and 2) endless Telephone Game-style recycling, and inevitable increasing distortion, of alleged Dissident Right quotes lifted from earlier attacks. Osita Nwanevu's How National Review Helped Build the Alt-Right| The magazine laid the foundations for the movement it now opposes, (Slate, March 23, 2017) has some of that. But it also has hold of a great truth: that Jared Taylor, John Derbyshire and myself, among others, are much closer to National Review's historic political positions than the current crew of cuckservatives who are running it into the ground.

Still, for the record, one Telephone Game error: Nwanevu [Tweet him] claims that in Alien Nation I "warned against an incoming tide of 'weird alien' migrants 'with dubious habits'..."

In politics as elsewhere, if you ask a stupid question, you get a stupid answer — or at any rate a terse answer. And asking people if they want their communities to be overwhelmed by weird aliens with dubious habits is a stupid question. The answer is inevitable.

To any reasonable person, this is clearly deliberate hyperbole designed to dramatize the point that immigration can be shocking to a host community. To torture it into an alleged direct statement by me requires a selective excerpting technique that we call at VDARE.com "Ransom Note Racism."

I don't actually know if Nwanevu—or his reporter, Laura Wagner—are reasonable people. I suspect they just uncritically picked this manufactured quote up from the Cultural Marxist echo chamber.

Anyway, I've turned James Kirkpatrick loose on them and we'll be posting his thoughts tomorrow night.