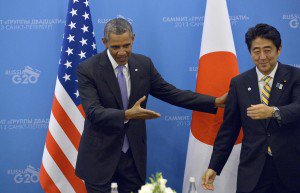 Only one of these men cares about the Nation he governs

One of the few pleasures we have at here VDARE.com is our Netanyahu for President Campaign. It allows to us highlight the hypocrisy of some American Amnesty enthusiasts. And to sincerely applaud a Government doing the right thing.

On a recent television programme, Shinzo Abe was asked about one of Japan’s most politically delicate topics: immigration. Given that the population is shrinking and fewer than 2 per cent of residents are foreign, was it time for the country to throw open its doors?

The prime minister’s answer could hardly have been clearer – or more disheartening for advocates of a radical new embrace of outsiders.

This was because Abe got straight to reality:

“In countries that have accepted immigration, there has been a lot of friction, a lot of unhappiness both for the newcomers and the people who already lived there,” he told the audience, as he held up a white signboard marked with a red “x” to underscore his negative position on the issue.

In recent years Japan has experienced low economic growth and the population is indeed starting to decline. But this is from a very high level of prosperity.

It appears that the Japanese understand what I call the Toilet Paper fallacy – increased population might mean better business for certain components of the economic mechanism but not necessarily for the population as a whole. Mainly it is simply redistributive.

in 2013 the Justice Ministry slammed the door shut for refugees, approving only six asylum seekers’ applications for refugee status out of 3,260 cases — the lowest number in 15 years…

Over to you, Ann Corcoran and Brenda Walker

The Japanese simply have no interest in importing charity cases.

But there is a tremendous campaign to intimidate them. I strongly commend Federale In Japan: It Works—And It Could Work In The U.S. Too

The Japanese, like any other group, possess an employability curve, much like the Bell Curve. However… Japanese worker may be interchangeable, but he is not disposable. Most importantly, he is not simply replaced by immigrants.

Japan’s counter-example has not gone unnoticed by the Neocon/ Cultural Marxist elite in the West. They don't like the idea of Japan for the Japanese…

On the surface, Japan is a threat to no one—certainly not America. However, by seeking to care for her own people, rather than the Slave Power, Japan is dangerous.

Neoconservatives and cultural Marxists are not content with destroying America. They want to destroy Japan—to ensure that we can’t imagine another world is possible.

It is now over a week since this strategic statement on immigration policy by the head of a major Industrial Democracy was picked up by the U.K.'s  Financial Times.

Google News indicates not one American MSM outlet chose to report that the Japanese Prime Minister declared against immigration.

All the news that is fit to print?