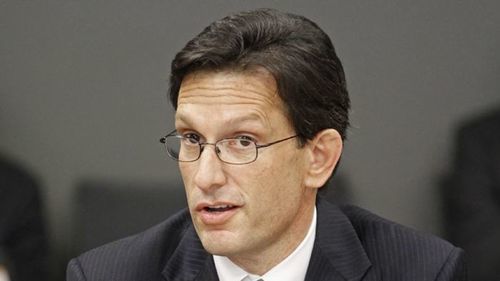 The Associated Press called the race for Cantor about an hour after polls closed at 7 p.m. ET.

Cantor is the second-most powerful member of the U.S. House and was widely seen as the next in line to succeed House Speaker John Boehner.

Cantor’s loss to a political novice with little money marks a huge victory for the Tea Party movement, which supported Cantor just a few years ago. …

Brat teaches at Randolph-Macon College, a small liberal arts school north of Richmond. He raised just more than $200,000 for his campaign, according to the most recent campaign finance reports.

Beltway-based groups also spent heavily in the race. The American Chemistry Council, whose members include many blue chip companies, spent more than $300,000 on TV ads promoting Cantor. It’s the group’s only independent expenditure so far this election year. Political arms of the American College of Radiology, the National Rifle Association and the National Association of Realtors had five-figure independent spending to promote Cantor.

Brat offset the cash disadvantage with endorsements from conservative activists like radio host Laura Ingraham, and with help from local Tea Party activists angry at Cantor.

Much of the campaign centered on immigration, where critics on both sides have recently taken aim at Cantor.

Brat has accused the House majority leader of being a top cheerleader for “amnesty” for immigrants in the U.S. illegally. Cantor has responded forcefully by boasting in mailers of blocking Senate plans “to give illegal aliens amnesty.”

It was a change in tone for Cantor, who has repeatedly voiced support for giving citizenship to certain immigrants brought illegally to the country as children. Cantor and House GOP leaders have advocated a step-by-step approach rather than the comprehensive bill backed by the Senate.

“The entire amnesty and low-wage agenda collapses if Cantor loses — all the billions of special interests dollars, all the favors, all the insider dealing — all of it is stopped in its tracks tomorrow if the patriotic working families of Virginia send Eric Cantor back home tomorrow.

Tomorrow, the middle class has its chance to fight back.

Tomorrow, the people of Virginia can show up to the polls and defeat the entire crony corporate lobby.

Tomorrow, we can restore our borders, rebuild our communities, and revitalize our middle class.”

An economics professor who understands the law of supply and demand?!?

Here’s Brat’s list of publications from his faculty webpage.

In one of the most stunning primary election upsets in congressional history, the House majority leader, Eric Cantor, Republican of Virginia, was soundly defeated on Tuesday by a Tea Party-backed economics professor who had hammered him for being insufficiently conservative.

Mr. Cantor’s defeat delivered a major jolt to the Republican Party — he had widely been considered the top candidate to succeed Speaker John A. Boehner one day — and it has the potential both to change the debate in Washington on immigration and to reshape the midterm elections, which had been favoring his party.

With just over $200,000, David Brat — a professor at Randolph-Macon College in Ashland, Va. — toppled Mr. Cantor, repeatedly criticizing him for being soft on immigration and contending that he supported what critics call amnesty for immigrants in the country illegally. The Associated Press declared Mr. Brat the winner.

Going into the elections, most Republicans had been watching for how broad Mr. Cantor’s victory would be, with almost no one predicting that he would lose.

Mr. Cantor’s defeat — the most unexpected of a congressional leader in recent memory — will reverberate in the capital and could have major implications for an immigration overhaul.

Mr. Cantor, who is in his sixth term, had sought to rebut Mr. Brat’s charges on immigration, using some of his $5.4 million to send fliers and air television ads in which he claimed to oppose an “amnesty” policy. But with significant help from conservative talk radio figures such as Laura Ingraham, Mr. Brat was able to galvanize opposition to Mr. Cantor in one of Virginia’s most conservative congressional districts.