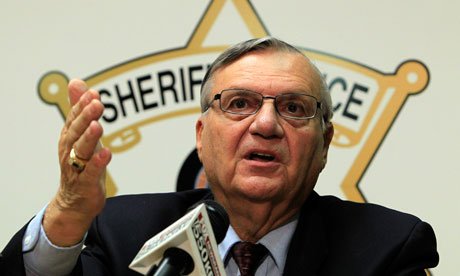 If you can make it to Oregon's state capitol in Salem this Saturday afternoon, June 27, you'll hear Sheriff Joe Arpaio (Maricopa County, Arizona) address a Grassroots Rally focused on the 2nd Amendment, limited government, getting tough on crime, Official English, and E-Verify.

The latter two items are the subjects of initiatives that Oregonians for Immigration Reform [OFIR] are working to qualify for the 2016 ballot, following up their overwhelming victory last November in overturning driver's licenses for illegal aliens. (OFIR is an invited participant in Saturday's rally, which is a project of the Oregon Republican Party.)

One lucky rally attendee who's willing to splurge $5 for a raffle ticket will walk away with a pair of the pink underwear shorts that "Sheriff Joe," famously, supplies to clothe his jail's inmates. There are also several other custom, Arpaio-themed prizes.

According to the local newspaper,

Arizona’s Maricopa County Sheriff Joe Arpaio, a no-frills lawman known nationally for his conservative stance on immigration and hard-line policing, will be the lead speaker at an Oregon Republican Party rally scheduled for the Capitol steps at 3 p.m. Saturday.

“I’ll be talking about the thousands of people we turn over to ICE (Immigration and Customs Enforcement) in my jails, and how 36 percent come back,” Arpaio said. “Most politicians go to the border for a photo-op, but I’ve worked there. I have background.”

The steps of the capitol building have been reserved for the rally. OFIR's president Cynthia Kendoll told me that she hopes there will be a large, enthusiastic turnout of immigration patriots—even in the face of anticipated record-breaking temperatures—because the illegal-immigration brigades are organizing a simultaneous counter rally to demonize Arpaio, across the street from the capitol.

Causa Oregon broadcast an email—in both English and Spanish—announcing the counter rally. They griped about Arpaio and about OFIR's "two unpopular xenophobic" ballot measures, "one mandating the costly and flawed E-verify system for Oregon businesses ..."

Those are typical examples of open-borders fanatics' willingness to say anything, no matter how disconnected to reality. Gauging by how decisively illegal aliens' driver's licenses went down to defeat, it's unlikely that either E-Verify or Official English initiatives will be "unpopular" if Oregon voters are given a crack at them. Further, the "costly" E-Verify is free to its users and has no intrinsic "flaws," just being somewhat vulnerable to the identity theft that is rampant these years.

(As for "xenophobic," meh—those who oppose illegal immigration generally aren't afraid of illegal aliens' foreignness. We just want them to go home.)

So Oregon's immigration patriots who can attend the rally should make every effort to do so. You'll be "showing the flag" to those who disdain it. And it's your chance to meet the OFIR folks if you're not already joined up.