It’s good to see the press covering the coming revolution in the workplace caused by automation, as the San Francisco Chronicle did Sunday with a front-page story: 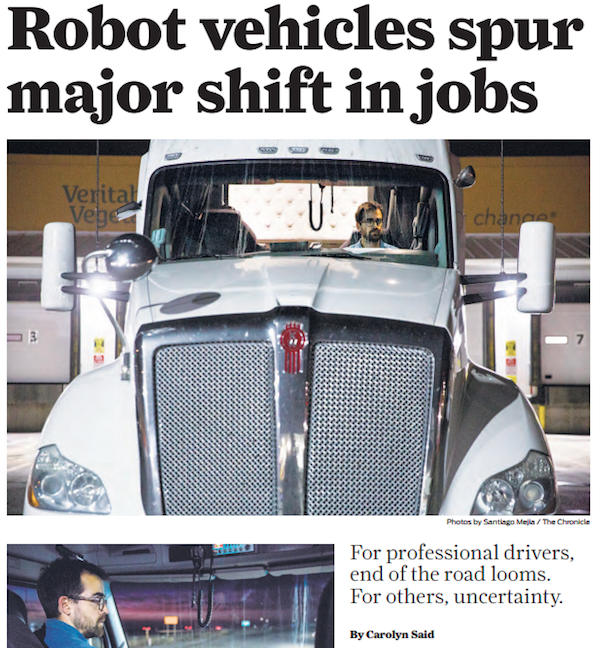 Driving is indeed a threatened occupation, and one big reason is the money being invested in the new technology by companies that don’t want to be left behind. So there is a rush for market dominance because huge money is involved. For example, Ford announced in February that it was investing $1 billion in a self-driving startup company. The same CNN Money article mentioned that GM spent $1 billion to acquire Cruise Automation in 2016.

One helpful item in the Chron piece is the instructive chart that analyzes all the sub-categories of driving jobs that may be affected — sobering! 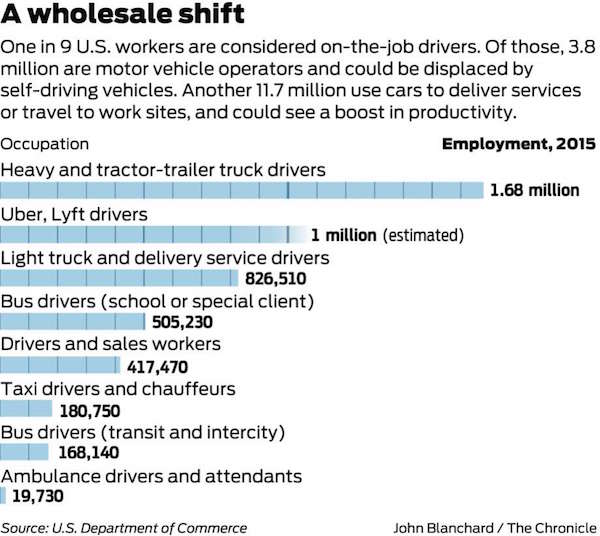 Also, the Chronicle has a section of articles titled On the cusp of a car revolution that has some interesting stuff.

The article does mention the “platoon” strategy for trucks, which seems like it will have to be a long-term intermediate step before full automation: a human drives the lead big rig and a couple of digitally connected vehicles follow. Self-driving technology may be safer overall, but it’s not perfect, and a 40-ton 18-wheeler run amok is too awful to contemplate. Plus, how would self-driving trucks get fuel and other on-road maintenance?

Meanwhile, even as robo-vehicles are rapidly coming this way, the usual suspects are scheming to import still more cheap-working immigrants as drivers, according to a recent article from an industry publication:

. . . Fleet Owner reached out to eight industry stakeholders with multiple phone calls and email messages to discuss immigrants in the U.S. trucking industry and either received no response or the equivalent of “no comment.”

This reluctance belies the fact that recruitment of immigrant drivers appears to be successful. Currently, of the 1.2 million motor carrier-employed U.S. truck drivers (operating Class 8 trucks) about 224,722 or 18.6% are immigrants, according to U.S. Census data for 2011-2015 as analyzed by Justin Lowry, PhD, a Postdoctoral Researcher at George Mason University’s Institute for Immigration Research. Figures for 2010-2012 clocked in at 15.7%, he said.

It’s crazy for the government to allow large levels of immigration to continue when we are entering a period of increasing unemployment caused by automation in the next few years.

Finally, note the weak title in the online version of the article: of course there will be more tech jobs in the automated future, but fewer people will have jobs overall because the point of employers installing machines is to save money.

Robot cars may kill jobs, but will they create them too?, San Francisco Chronicle, December 10, 2017

Millions of people drive for a living; autonomous technology could make their work obsolete

At 38, he has been driving trucks since he was a teenager working on summer harvest crews in North Dakota. With a master’s degree in fine arts and a penchant for listening to classic books on the road, he doesn’t fit the standard trucker profile. But the aptly named Goodroad, who has put in more than a decade driving for Veritable Vegetable, an organic produce distributor, is an eloquent spokesman for his millions of comrades now traveling America’s highways.

“The end of our species is coming — it sounds like it should be a country song,” he said as he finished his regular five-day haul from San Francisco to New Mexico and back, his dog, Louis, riding shotgun. “I definitely see that truck drivers are going to be a relic of the past in the future.”

That future — one in which our vehicles, including trucks like his, will drive themselves — is fast approaching. Some experts say fleets of driverless vehicles will be on the road within two years.

Along with utopian forecasts of far fewer traffic accidents, cleaner air and cheaper transportation, there’s another sobering prediction: Self-driving vehicles could cost millions of people their jobs. Autonomous autos will also create new jobs, but those most likely to lose their livelihoods, including many truck drivers, may not easily find new occupations.

Some 3.8 million Americans work as motor vehicle operators, driving trucks, delivery vans, buses and taxis, according to the Bureau of Labor Statistics. Truck driving is the most common occupation in 29 states and the second- or third-most common in most others. On top of that, an estimated 1 million people drive part time for Uber and Lyft in the U.S. Globally, more than 100 million people are estimated to work behind the wheel.

“This will be the biggest disruption in work and jobs that the country has ever experienced,” said Andy Stern, a labor expert and president emeritus of the Service Employees International Union. “It will happen relatively soon, and we are in denial and avoidance.”

Naturally there is the usual chirping about safety — “far fewer traffic accidents” — as is the case above, but the mega-profits for future winners are mentioned further down in the article:

Then there are more esoteric opportunities. A report from Intel predicts the rise of a new “passenger economy,” worth a jaw-dropping $7 trillion by 2050. The bulk of that revenue would derive from ride hailing and the freight industry.

Some $200 billion would consist of goods and services provided to people during their rides in robot taxis. Think manicures, massages, lattes, fast-casual meals, mobile health care, remote meetings, immersive digital entertainment. (Intel doesn’t mention it, but practitioners of the world’s oldest profession might ply their trade in self-driving cars as well.)