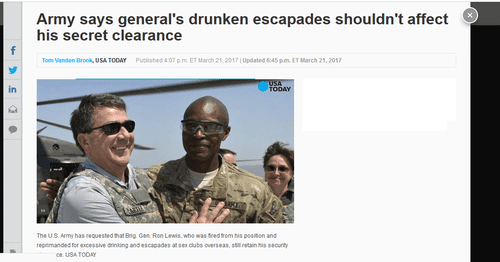 The media was shocked when it learned that ex-civil servants who have been prominent in the "Resistance" to Donald Trump may be stripped of the their security clearances. Saagar Enjeti tweeted that the briefing room "audibly gasped when @PressSec said POTUS is looking into pulling the security clearances of Brennan, Clapper, Comey, Hayden, Rice, and McCabe.

Of course, some of the gaspers would be journalist who personally know these people, and have received illegally leaked classified material from them--and published it.

This was my favorite part of Sarah Huckabee Sanders' press conference. https://t.co/gfXfiT3Kdf

You might want to ask "Why would someone who has left government need a security clearance?" Answer: to get rich in the defence industry. This came up in the case of former Lieutenant General Ron Lewis, an Affirmative  Action beneficiary whose "escapades" embarrassed Obama Defence Secretary Ash Carter enough that Lewis retired as a Brigadier General, a two-rank drop, which knocked $10K off his retirement pension. [Army says general's drunken escapades shouldn't affect his secret clearance,  by Tom Vanden Brook, USA TODAY, March 21, 2017]

The late Kevin O'Brien blogged about this story in March, 2017, and provided some background on security clearances--he had one himself.

The problem with clearances is this: they are necessary for many kinds of employment; ast hey are processed by a government organization, they are very slow, inefficient, and expensive to get; therefore, private employers want to get people the military has already spent money to clear.

It is an article of faith in the government that the clearance system is effective, yet the system, developed from an earlier British system of “positive vetting” after some damaging spy scandals, has not prevented the continuation of spy scandals or exposed any spies. It does not prevent leaking to potential enemies through the media, an act that is not taken seriously by Pentagon bureaucrats or their leaders but that has cost billions.

Perhaps everybody should surrender his clearance on leaving government employment, and let employers start everyone from zero. Your clearance ultimately belongs not to you, but to the people of the nation. Perhaps they should be easier to get — and easier to revoke.

There's more to the General Ron Lewis story, read the whole thing, but his "crimes," which involved visiting whorehouses, using a government credit card, and having an enlisted woman (race unspecified) visiting his room, were not actually serious. Lots of people like that make good fighting men--General Patton, who had his own controversies, is alleged to have have said "A soldier who won't f--- won't fight".

Brennan, Clapper, Comey, Hayden, Rice, and McCabe, on the other hand, seem to be involved in an attempt to overthrow the democratically elected President. There's no reason for the Trump Administration to officially certify them as trustworthy, because they aren't.