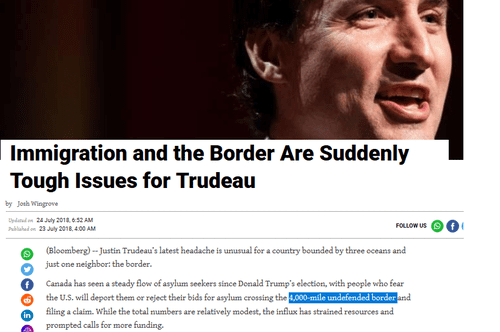 Justin Trudeau Under Fire On Immigration

The amount of virtue signaling on immigration issues is inverse propotional to the amount of immigration directly experienced. Thus, Canada's extremely leftist Prime Minister, Justin Trudeau, is suddenly on the defensive about immigration.

Trudeau partially created this problem by advertising his country as essentially having Open Borders for "refugees."

To those fleeing persecution, terror & war, Canadians will welcome you, regardless of your faith. Diversity is our strength #WelcomeToCanada

Not surprisingly, Canada was besieged by thousands of migrants, putting a strain on resrouces.

The issue has the Canadian prime minister caught between demands for tighter security and his own pledge of open arms. The controversy has ramped up in recent weeks, in part because of Ontario’s election of a conservative government led by populist Doug Ford. He and two other premiers have called on Trudeau to act, and a political sparring match is underway over what values are more Canadian: welcoming refugees, even those arriving illegally, or securing the border?...

Voters are uneasy about the illegal crossers, often referred to as “irregular” migrants, because they are legally entitled to make a claim even though the physical act of crossing a border like that is a crime. An Angus Reid poll released in September, just after the number of crossings peaked, found 53 percent of Canadians thought the country was being too generous to people who cross the border illegally. For past conservative voters, the number was 75 percent.

[Immigration and the border are suddenly tough issues for Trudeau, by Josh Wingrove, Bloomberg, July 23, 2018]

There's a lesson here for immigration patriots. The way to force our opponents to retreat is to make them live with the consequences of their policies. Whenever possible, state leaders should always make sure "refugees" and Third World migrants are directed towards far-left enclaves. Experience has a way of concentrating the mind, even mushy headed leaders like Justin Trudeau.