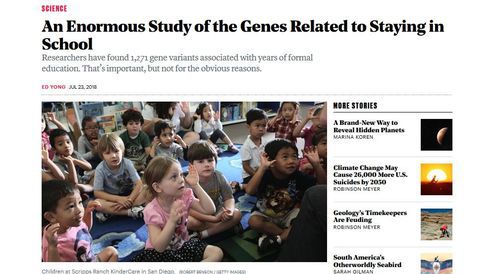 Genetics of Educational Attainment in Sample of Over a Million People

Here’s a vast gene study, the first million plus sample size on the topic of cognition, focusing on educational attainment (years of education). From Nature Genetics:

Gene discovery and polygenic prediction from a genome-wide association study of educational attainment in 1.1 million individuals

Here we conducted a large-scale genetic association analysis of educational attainment in a sample of approximately 1.1 million individuals and identify 1,271 independent genome-wide-significant SNPs. For the SNPs taken together, we found evidence of heterogeneous effects across environments. The SNPs implicate genes involved in brain-development processes and neuron-to-neuron communication. In a separate analysis of the X chromosome, we identify 10 independent genome-wide-significant SNPs and estimate a SNP heritability of around 0.3% in both men and women, consistent with partial dosage compensation. A joint (multi-phenotype) analysis of educational attainment and three related cognitive phenotypes generates polygenic scores that explain 11–13% of the variance in educational attainment and 7–10% of the variance in cognitive performance. This prediction accuracy substantially increases the utility of polygenic scores as tools in research.

Ed Yong writes in The Atlantic:

Perhaps counterintuitively, Benjamin thinks that his team’s research “is really important for research on improving educational systems.” To understand how, forget genes for a moment, and think about wealth.

It’s uncontroversial to say that people who are born into rich families are more likely to fare better in school than those from poorer backgrounds. Of course, poor kids can still soar in school, and rich ones can flunk out, but few would deny that money is a powerful influence on people’s futures. Now, consider that household income explains just 7 percent of the variation in educational attainment, which is less than what genes can now account for. “Most social scientists wouldn’t do a study without accounting for socioeconomic status, even if that’s not what they’re interested in,” says Harden. The same ought to be true of our genes.

Imagine that authorities are planning to provide free preschool to kids from disadvantaged backgrounds. To see if such a policy actually helps children stay in school for longer, scientists would randomly assign the free classes to some kids but not others. Then, they would look at how the two groups fared. In doing so, they’d always try to account for factors like wealth that might also vary between the two groups. Similarly, “you can now wash away the genetic effects so you don’t have to worry about them,” says Benjamin. And in doing so, researchers could more precisely work out whether a policy change has any benefits—and they could do it through smaller, cheaper studies.

This, he argues, is the most powerful reason to study the genetics of education or cognitive ability—and ironically, it has very little to do with genes. Instead, it’s a way of making social science more powerful.

… The researchers scanned the DNA surrounding these influential variants and found an intriguing pattern.

“They’re not just randomly scattered around the genome,” said James J. Lee, a behavioral geneticist at the University of Minnesota and co-author of the new study.

The variants are linked to genes active in the brain, helping neurons to form connections.

In other words, of the genes where we know what they do, they tend to be involved in growing the brain. Of course, that’s what, in hindsight, you’d expect, so that demonstrates the prima facie validity of the findings.

A key to educational attainment may not be how quickly information is acquired, but how quickly it can be shared between various regions.

“Maybe it’s not about how fast a signal can zip along a cable,” Dr. Lee said. “It’s about the complexity of the connections between point A and B.”

But the genetic links suggest another, perhaps stranger possibility: Some variants linked to education work not in the brains of students, but in the people they inherited the variants from — their parents.

By somehow shaping the behavior of parents, these variants may alter the environments in which children grow up in a way that helps or impinges on time spent in school.

Based on their findings, Dr. Benjamin and his colleagues figured out how to calculate a genetic “score” for educational success. The more variants linked to staying in school longer, the higher an individual’s score.

So that’s pretty decent predictive power, at least as strong as many standard sociological factors such as family income. What we can do now is go back to family income and subtract the genetic influence and see what’s leftover.

A similar result emerged when the scientists looked at how many people in each group had to repeat a grade in school. In the lowest fifth, 29 percent did, while in the top fifth, only 8 percent did.

But when Dr. Benjamin and his colleagues calculated scores for African-Americans, it failed to predict how well different groups had done in school. One likely reason is that genetic markers aren’t reliable guides to how genes influence traits in different populations.

In other words, African Americans are genetically different enough from white Americans that a model developed on whites doesn’t work on blacks? But as Carl Zimmer explained in his vast recent book on genetics, race doesn’t really exist genetically for reasons. How to reconcile those two ideas? Perhaps Carl has some thoughts he’ll share with us …

Dr. Benjamin and his colleagues hope to grow their study to 2 million people or more, and expect to find thousands more genes linked to education.