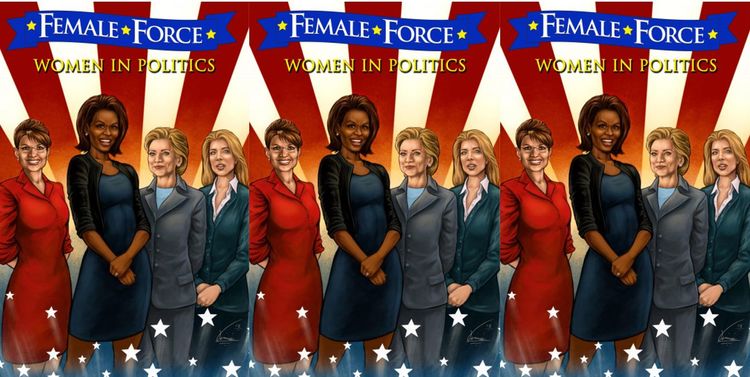 Sarah Palin vs. Elitist Housewives Like Michelle And Hillary

“Note that the only woman on the cover who didn’t get where she is because of her last name…Is Sarah Palin – whose boobs I don’t think are that big in real life, but I’ll defer to male readers on that.”

The Female Force magazine is about “empowering women” and enriching the publisher, because it’s a boring educational comic that can be sold to school boards for Your Tax Dollars, and foisted on kids who won’t read it.

I know that all the ladies who aren’t named Palin have degrees from universities older, more expensive, and farther east than the one Palin went to, but Mrs. Clinton is the only one who has ever had a real job.(Oddly enough, this was in Alaska.)

Everything else the three Democratic women have done amounts to

As for the chest expansion question, the artist has posed Sarah Palin with her hands behind her back, which automatically thrusts things forward. This Newsweek cover is what she actually looks like–with her hands on her hips.